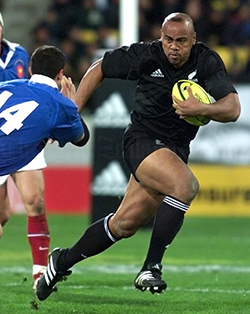 ALL Black Jonah Lomu may have been one of the biggest names in rugby union but he was nearly broke when he died, the organisers of a trust set up to support his young sons said Tuesday.
Lomu’s sudden death last month at the age of 40, following a years-long battle with a rare kidney disorder, brought outpourings of sympathy from around the world, not only from sports personalities but also heads of state and Hollywood stars.
But it has emerged the commercially in-demand personality had few financial assets.
In response, New Zealand Rugby Players Association chief executive Rob Nichol said the Jonah Lomu Legacy Trust had been established by business people and friends of the hulking winger to support his children Dhyreille, six, and Brayley, five.
Nichol told Radio NewstalkZB that Lomu’s wealth from a stellar career did not match people’s expectations and he may have been a victim of his own generosity where he often helped others at the expense of his own family.
“The estate has to go through a probate period, but we don’t see any financial benefit or proceeds going to his family,” Nichol said.
“The impression that he was a global superstar doing all this stuff, I think over time, frankly, it probably wasn’t as substantial as people just assumed.
“Yet he had this sense of pride that he wanted to maintain that front that he could help everyone, he could help his family and help his community, anyone who came knocking and wanted assistance.
“He’s clearly taken on obligations, financial or otherwise, on behalf of others and that has definitely been at the expense of his family.”
Close friend and fellow All Black Josh Kronfeld told the New Zealand Herald players of Lomu’s era did not get paid big bucks.
“People read what Richie McCaw and Dan Carter make playing for the All Blacks and assume those figures are what Jonah was on from the mid-1990s on but that’s just not right,” he said.
“That sort of money wasn’t around for any players in our era, including Jonah.”
He added that Lomu’s earning potential after retirement was also affected by his health problems.
‘Give back a little’
Nichol said Lomu, hailed as the sport’s first global superstar, was a proud man who did not want to be a burden and felt an obligation “to be the one who helped others as opposed to being the one reaching out for help”.Advertisement

“People have presumed or assumed that he has been able to earn quite good money over the last 10 to 15 years but his illness and the treatment he has had to go through have severely hindered his ability to do that,” he added.
Nichol said he did not know if Lomu had been “ripped off”.
“We know people are going to have a lot of questions around what has happened and what’s gone on in the past. We just don’t know,” he said, adding that the trust was solely for his sons and excluded wife Nadene as a beneficiary or from having control over the funds.
While it was not unusual for people to die broke, Nichol believed Lomu deserved special attention.
“What we can’t ignore is that Jonah Lomu was a phenomenal success for rugby, he took rugby to the world to a certain extent. And we have all benefited from that,” he said.
“If people have benefited then now, understanding the situation, they might want to give back a little bit to a guy who wasn’t sophisticated or complicated, he didn’t try and trick anyone, he just went about doing what he did and handling it the best he could.”