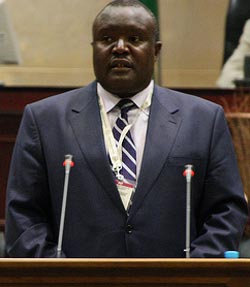 CHIEFS are demanding powers to issue gold mining permits in areas which fall under their jurisdiction as well inclusion in various indigenisation boards.
Speaking at the just ended chiefs’ annual conference in Bulawayo, Chiefs Council leader, Fortune Charumbira said the Mines and Minerals Act should be repealed so that chiefs are also involved in the process of granting gold mining licences to prospective miners within the chiefs’ respective areas.
According to the current Mines and Minerals Act, mining licences are applied for through the Mining Commissioners from the mining districts in which the resource is located.
“As custodians of the land, chiefs are the ones who are supposed to allocate mining claims. We are not happy with the current situation where gold prospectors just invade our areas armed with licences from the ministry of mines without our knowledge. As chiefs, we own that gold and we should be consulted,” said Charumbira.
He also claimed that several gold prospectors were living in constant conflict with the local communities because chiefs were not involved in the issuance of gold claims processes.
Charumbira also demanded the inclusion of chiefs and headmen in indigenisation and economic empowerment boards under the community share ownership trust scheme which was set up by the government through sourcing funds from foreign-owned mining companies operating in various parts of the country.
“Chiefs are left out in community share ownership trust. Only one mining company, Ngezi platinum, has embraced chiefs in this project. We all want our chiefs to be directors of the community share ownership trust scheme. These companies should be forced to accept us as the trustees,” said Charumbira.
Officially opening the chiefs’ indaba on Saturday, President Robert Mugabe promised the chiefs farms and other luxuries, saying the traditional leaders deserved to be pampered with all kinds of niceties because they play a very “important role”.
The president also assured the chiefs that within a fortnight the chiefs will take delivery of brand new Isuzu Double Cab vehicles.
“If we promise people, we always make sure that the promises are fulfilled and in two week’s time, the chiefs will be coming to get their vehicles in Harare. (Kasukuwere) make sure these chiefs are given their cars. These cars should be quality cars that are in good condition so that they carry out their duties,” said Mugabe amid unrestrained cheers from the chiefs and their spouses.Advertisement