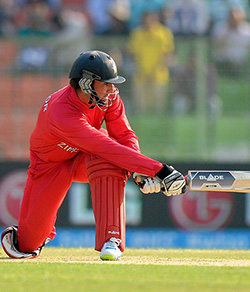 SOUTHERN Rocks’ batting malfunctioned in both innings to leave them winless after five matches in the Logan Cup.
Mid West Rhinos pacer Michael Chinouya scuttled the opposition out for 95 and when the follow-on was enforced Bradley Wadlan sweetened his first-class debut by following up a composed half-century at the top of the order with 6-45 to lead Rhinos to a comfortable innings win.
That Wadlan’s 72 was the lowest among the top-three batsmen highlighted Rhinos’ performance after being put in.
He added 122 runs with Vusi Sibanda for the opening partnership and that foundation was strengthened by Brendan Taylor’s 81-ball 83.
Taylor’s dismissal triggered a minor wobble but Rhinos pressed on to declare on a formidable 353.
Roy Kaia, who picked up three wickets, was also their batting mainstay as the rest of the order crumbled around him.
Chinouya got rid of the openers early and that blow proved too difficult to get over as Rocks slipped to 34 for 4. A brief period of stability was ushered with Kaia’s 34 off 79. But his wicket hastened the innings’ end with Chinouya returning to bump off the tail to finish with 4 for 17.
Still trailing by 258, Rocks were invited to follow-on and Kaia came to their rescue again. Striking 57 off 137, he served as the backbone for the rest to bat around but the middle order did not turn up.
Wadlan’s first wicket took the teams to tea on the second day, and his second came on the cusp of stumps to leave Rocks at 152 for 5. The tail was unable to combat him on the third morning as he picked up seven for the match.
Tatenda Mupunga claimed nine wickets in the match to steer Mountaineers to an innings victory over Mashonaland Eagles. Sikandar Raza got Eagles off to a flier after being inserted, but with his wicket ushered a top-order collapse.
Recovery from losing three wickets for 15 runs – after an opening stand of 45 – was difficult as Mupunga struck twice in three overs to leave Eagles at 93 for 5. He returned to take care of the tail to finish on 5 for 45, his second five-for in as many matches.
Mountaineers’ reply seemed in good hands with Kevin Kasuza and Hamilton Masakadza 83-run second-wicket stand. However, Brian Vitori and Elton Chigumbura brought about a collapse that saw the score slump to 136 for 5.Advertisement

The tail was exposed and Eagles still had a lead of 37. Shingi Masakadza (64) and Natsai M’shanwe (60), though, steered Mountaineers past troubled waters with a well-crafted stand of 98 for the seventh wicket, and helped the total bloom to 321.
Four bowlers were used by Mountaineers in the second innings, and all of them made considerable impact. Mupunga starred again, dismantling the lower-middle order to leave Eagles at a woeful 61 for 8.
Mark Vermeulen held firm amid the carnage with a 175-ball 79, but that was the sole bright spot with Eagles bowled out for 136.