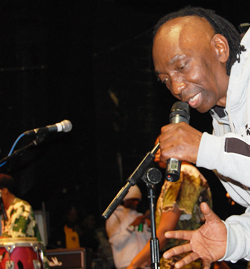 THE UK Zimbabwe 36th Independence anniversary celebrations will take place at the Corah Suite, Leicester on Saturday 16 April.
Dubbed the Chimurenga Bira Festival, music icon, Thomas “Mukanya” Mapfumo based in the United States, Ray Majongwe and Steve “Dhongi” Makoni, both in Zimbabwe, will grace the occasion.
The three will team up with red hot UK-based DJs King Alfred and Tee Mag.
According to a spokesperson of VeeJay Events who are managing the show, the all night music extravaganza will be a blend of yesteryear classics and yet to be released tunes.
In a telephone message, Mukanya sounded very bullish and told his thousands of fans that this was a show not to be missed.

Mapfumo, who vowed that this upcoming UK event would be his best ever, promised a full catalogue of what made him the true giant and legend of Zimbabwean music.

The Chimurenga genre luminary added that he was determined to show his fans that Chimurenga music will live forever.

Makoni was equally assertive, echoing Mapfumo’s assertions that this show was not only about old tunes but fresh sounds sure to appeal to both the young and the old.
“We will dish out some of the old sounds but there is a lot in store to cater for the diverse audience that will grace the occasion,” said Makoni, who is also known by his totem “Nyati” in music circles.
Burly Majongwe, well known for lyrics poking fun at certain sections of the Zimbabwe political leadership for being duped by a n’anga (witchdoctor) claiming to have discovered crude oil in Chinhoyi, has since moved on and has knew sounds that will keep the audience captivated on the dance floor.
The “Diesel paChinhoyi” hit maker, Majongwe, or Shumba, as Majongwe is popularly known in the Zimbabwe music industry, has also promised his best.
“Our music speaks truth to power and we are not afraid. Fans should expect the best show,” said Shumba.
Zimbabwe celebrates its independence on April 18 but the show will be on the 16th.Advertisement