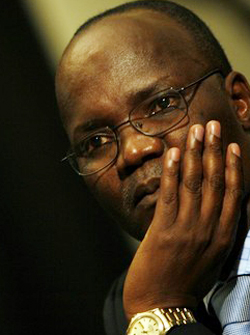 JONATHAN MOYO is not a very happy man right now. In a small manner of weeks’, media house after media house has exposed his hand in corrupt deals.
The country’s Anti-Corruption unit has tried to arrest him, twice. Despite being blocked by the President, and then the acting President, they are not giving up, according to them “the docket is ready” and they will try arrest him, again.
Meanwhile, each day brings with it a new scandal, a new expose. The professor’s hands are being pictured in cookie jars. State cookie jars for that matter. We are told it is just the start. More is on the way. More is already on the way.
Pandora’s box has not just been opened. The lid has been blown off. That might even need rephrasing too. It’s not just Pandora’s box, its Pandora’s entire cargo of boxes! And they stink too.
But you see, it was not always this way for Pandora. In a way, Jonathan Moyo walked very close to the Tiger (Mugabe). He fed the Tiger, and identified its prey.
While he devoured opponents and peers, the Tiger even cheered him on. When the Tiger faced immense resistance back in the early 2000, it was Pandora who went to the moon and back just to protect the Tiger.
As head of the propaganda machine, Pandora covered the entire nation in a blanket of darkness, allowing the Tiger to rape the masses under its cover.
But, darkness has an effect of clouding sight, or mudding judgement, even for those that unleash it. One cannot switch off the lights for everyone in a room and maintain their own vision.
It was always a dangerous ploy to begin with. Playing in the dark brings hazards. Playing in the dark with a Tiger is suicide. Eventually after the Tiger eats everyone in the room, it will turn on the bulb bearer.
That is precisely where Moyo finds himself now-a victim of his own mischief.
By treading on the tail of the Tiger in the dark, Moyo courted and guaranteed disaster, blindly so.
At some point he may have thought he is the Tiger himself.
It’s not the first time Moyo has made a mistake of identifying with those he hangs around with. We are repeatedly told that Moyo is a Ndebele, when we know very well he is at the very best ‘Quarter Ndebele’.
We know well that his surname Moyo is that of the VaRozvi, and the original Ndebele’s did not have surnames like that. If Moyo is a Ndebele, it is by assimilation and absorption. (Spoiler: expect him to keep lying about it)Advertisement

That is the problem with grandiose illusions, especially when they have a sick addiction to darkness. It does not help when the illusions occur in an arrogant despot who thinks the world of himself.
Of course, all these descriptions of Moyo’s true nature – a cunning sadistic arrogant reprobate – used to inspire the man, if not motivate his ‘hustle’.
For much of his life, Zimbabwe’s Minister for Higher and Tertiary Education, Professor Jonathan Moyo has reveled in adjectives of self that are less than honourable, if not even repulsive.
He has always deemed things like his exuberant arrogance, his uncanny ability to offend, and his propensity to be uncouth, conniving, and hideous as a strength.
Granted, the witty professor or the nutty weevil, depending on which adjective is appropriate, has not always been a problem for the person himself.
He shot to fame, by describing Robert Mugabe as the man with a ‘propensity to shoot himself in the foot’. Which is ironic, because Moyo finds himself in the very same spot. I wrote about this sometime last year.
He sealed his stature in Zanu folklore by becoming its extremist of extremist spin doctors. If at all his excuses are true, of which they are not, Moyo is now starring down the barrel of his favourite gun – spin is doctored against him, and he is in near tears.
Back to the Tiger, Moyo may have thought himself to be the Tiger too. He went around town gun-toting like a cowboy, picking pockets of state coffers like a hoodlum.
As the Tiger ages, and things fall apart, it has had a knock on effect on Moyo too.  The center cannot hold anymore. The end is nigh, maybe not least for the Tiger, but for Baba Zanele, it is here.
I suppose the good old moral stands and lives – Although memories fade fast, all things come to an end, even if you are Professor Jonathan Moyo – the learned academic accused of being the learned crook.
Maynard Manyowa is a contributing Editor for Khuluma Afrika – a center for analysis, commentary and investigative journalism