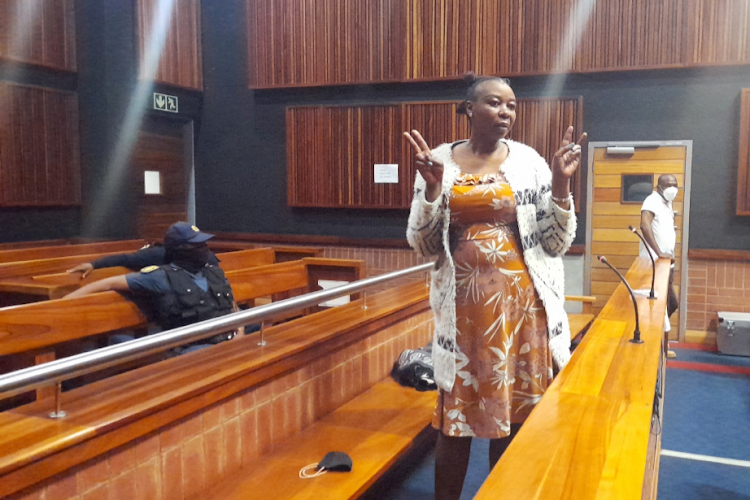 Nomia Rosemary Ndlovu poses for media in the high court in Palm Ridge before taking the stand to defend herself in a multiple murder trial.
Spread This News

The former police officer on trial for allegedly murdering and plotting to kill relatives to cash in life insurance policies has been described by former colleagues as a regular gambler who often bought them lunch.

Nomia Rosemary Ndlovu, who is facing six charges of murder, and others including fraud and attempted murder, was apparently “very moneyed and generous” to her colleagues at the Thembisa South police station on the East Rand.

Two of Ndlovu’s former colleagues, who spoke on condition of anonymity on Tuesday, said she often came to everyone’s rescue, especially when most of them were broke.

Ndlovu, 46, has been behind bars for more than two years after her arrest in 2018.

During the trial, the state lined up more than 30 witnesses who testified against her in the high court sitting in the Palm Ridge magistrate’s court.

The state has closed its case and the court is now hearing the defence’s testimony which started with Ndlovu on the stand on Tuesday.

Ndlovu is accused of killing six relatives, including her lover, and plotting to murder her sister, nieces, nephews and mother to cash in on funeral and life insurance policies.

When former police officer Nomia Rosemary Ndlovu took to the stand for the first time on Tuesday, Zanele Motha’s partner was sitting in the court …

Among those she is accused of killing is her partner Yingwani Maurice Mabasa, with whom she had a child. Mabasa died in October 2015 after the third attempt on his life. He was stabbed more than 80 times.

The former colleagues said Ndlovu had been at the station since it was opened in 2014.

They said she often splurged on as many as five colleagues for lunch without expecting the money back.

“She would buy everyone here lunch when we were broke. She was close to all of us,” one officer said.

“She had lots of money and was generous with everyone,” said another former colleague, adding Ndlovu also dished out loans to broke workmates.

Ndlovu was described as an ordinary woman who ate mala mogodu (tripe) and got along with everyone at work.

She was an ordinary woman who we all liked and didn’t show any signs of anything strange happening in her life.

“She was an ordinary woman who we all liked and didn’t show any signs of anything strange happening in her life,” a former colleague said.

She said Ndlovu, who she referred to as  MaNdlovu was often stressed and unhappy when she was broke.

“She would mention it first thing in the morning after arriving to work,” she said.

The officers said she told them she lost her first husband who was killed and most recently met her new lover, who they described as “her husband” and who was also killed.

“We now realise it’s strange she lost both her husbands. who were both murdered,” one officer said.

A colleague who saw Ndlovu’s docket said she couldn’t believe the cases and evidence the state had put together against her.

“That person in the docket is different to the woman who I regularly shared lunch with.”

Ndlovu is facing charges for the murders of:

Her cousin Witness Madala Homu, who was murdered in March 2012. She allegedly received R131 000 from policies.

Her sister Audrey Somisa Ndlovu, who was killed in June 2013. Ndlovu allegedly claimed more than R717 000 in insurance.

Her boyfriend Mabasa. She allegedly claimed R416 000 from insurance companies.

Her nephew Mayeni Mashaba, who died in April 2017. There was no information immediately available on whether she had taken out policies for him and whether she had put in claims.

Audrey’s son Brilliant Mashego, her nephew, who was killed in January 2018. There was no information immediately available on whether she had taken out policies for him and whether she had put in claims.