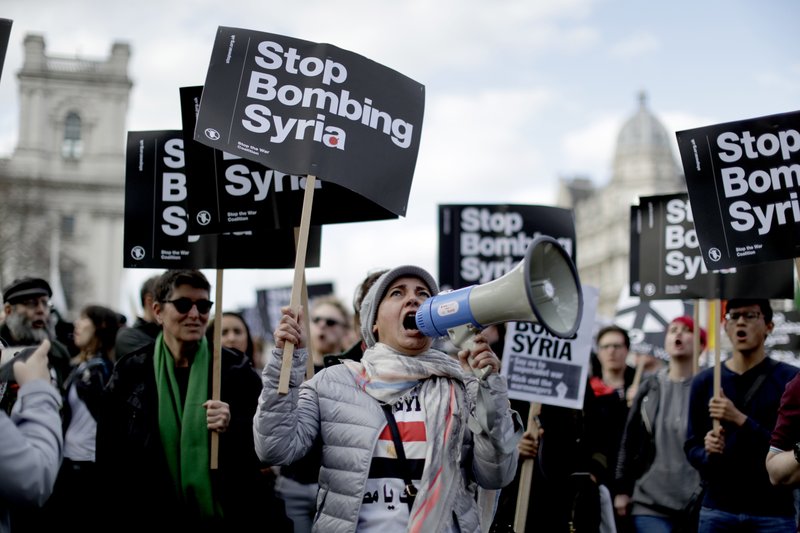 THE United States, France and Britain have said their airstrikes on Syria were a response to a reported chemical attack in a rebel-held Damascus suburb. However, none of the three nations have made public the evidence they might have proving a link between the Syrian government and the April 7 attack.

Syria and its military ally Russia have denied a chemical weapon attack took place, saying their inspectors visited the site and found no evidence of one. Western officials have dismissed the assertions as lies, contending that chlorine and sarin nerve gas were used in the reported attack that aid workers said killed 40 people in Douma.

Britain, France and the United States have primarily cited publicly available open source information and unspecified intelligence as evidence for the chemical assault and in turn for the U.S.-led airstrikes that were launched before international inspectors had investigated.

A fact-finding team from the Organization for the Prohibition of Chemical Weapons had been expected to inspect the site in Douma when the airstrikes took place Friday. At a news conference after the missile strikes, U.S. Defense Secretary Jim Mattis was adamant that at least one chemical agent had been used, but did not give specifics.

“I am confident the Syrian regime conducted a chemical attack on innocent people in this last week, yes. Absolutely confident of it. And we have the intelligence-level of confidence that we needed to conduct the attack,” Mattis said.

Asked whether it was a nerve agent or chlorine, he said, “We are very much aware of one of the agents. There may have been more than one agent used. We are not clear on that yet. We know at least one chemical agent was used.”

“There’s various intel, and I won’t speak to that,” she said. “But when we have more evidence and details I will come back to you.”

When asked why the U.S. had not shared the evidence it used to justify the strikes, White said that “a lot of this has to do with intelligence. And I am happy to show evidence if I can. But we were very confident about the decisions we made.”

A senior US administration official who demanded anonymity to speak publicly about the intelligence assessment said Saturday that “while the available information is much greater on the chlorine use, we do have significant information that also points to sarin use.”

“We’ve got symptoms described in reporting from media, NGOs, and other open sources,” the official added.

The French government said Saturday that it launched a military response based on unspecified intelligence and open-source information, which included “testimonies, photos and videos that spontaneously appeared on specialized websites, in the press and on social media in the hours and days following the attack.”

It said French experts did not have chemical samples to evaluate, but analyzed “the symptoms identifiable in the images and videos that were made public… All of these symptoms are characteristic of a chemical weapons attack.”

The report said the information “forms a body of evidence that is sufficient to attribute responsibility for the chemical attacks of 7 April to the Syrian regime” of President Bashar Assad and that there was “no plausible scenario other than that of an attack by Syrian armed forces.”

A top official at the French presidency, speaking on condition of anonymity because he was not allowed to discuss the military operation, acknowledged Saturday France had no samples. The official stressed the “obvious difficulty” of collecting evidence on the ground and suggested the Russians “cleaned it up” very quickly after the attack.

Speaking at a Monday news conference, French President Emmanuel Macron said the operation in Syria was “responding to the evidence collected on the ground that chemical weapons were used against the civilian population by Bashar Assad’s regime.”

Meanwhile, Britain has said it based its assertion that Syria was to blame for a chemical attack on intelligence and on open source information.

Prime Minister Theresa May said she was not free to divulge the intelligence used in her country’s assessment, but said in announcing the airstrikes that “a significant body of information, including intelligence, indicates the Syrian regime is responsible.”

May said “reliable intelligence” indicated that Syrian military officials coordinated the use of chlorine in the attack. Jeremy Corbyn, leader of the opposition Labour Party, has been unconvinced, calling the airstrikes “legally questionable.”

May said a barrel bomb — a large container packed with fuel, explosives and scraps of metal — was used to deliver chemical weapons and that a regime helicopter hovered over the city at the time of the attack. The British leader noted that the opposition in Syria does not use barrel bombs or helicopters.

The head of the Organization for the Prohibition of Chemical Weapons, Ahmet Uzumcu, said Monday that the agency’s team had not deployed to Douma. Syrian and Russian officials in Damascus told them there were still “pending security issues,” Uzumcu said.

The United Nations said it had provided the “necessary clearances” for the fact-finding mission.