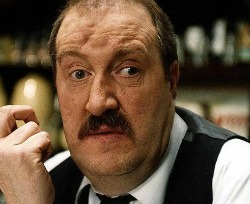 ACTOR Gorden Kaye, who was best known for his role in the long-running BBC sitcom ‘Allo ‘Allo!, has died aged 75.
The star’s former agency confirmed to BBC News he died at a care home on Monday morning.
Kaye played cafe owner Rene Artois on the hit show, which centred on the fictional exploits of resistance fighters in World War Two in German-occupied France.
He appeared in all 84 episodes of the sitcom, as well as a stage version.
‘Witty and amusing’
Tributes have been paid to the “terrific comic actor”.
Vicki Michelle, who co-starred opposite Kaye as waitress Yvette, praised him as a “brilliantly talented actor, consummate professional, loved the world over”.
Su Pollard, who appeared with Kaye in four series of BBC radio comedy For Better or for Worse, told the BBC the actor was “very clever, witty and amusing”.
“He was quite private, but he was very amiable and was more than happy to chat to his fans.
“He was very pleased he was able to turn his passion into his working life,” she said.
Born in Huddersfield, Kaye revealed in his autobiography the unusual spelling of his first name was due to a spelling error by the acting union Equity, which he decided to adopt.
The actor got his first big TV break in ITV soap Coronation Street, playing Elsie Tanner’s nephew Bernard Butler.
He went on to appear in a number of roles in sitcoms including Till Death Us Do Part, It Ain’t Half Hot Mum and Are You Being Served? before landing the role of Rene.
Kaye’s career almost came to an abrupt end in 1990 when he was critically injured in the Burns’ Day storm.
The high winds sent an advertising board through his car windscreen, leaving him with severe head injuries.
The star’s last TV role was in a one-off return of ‘Allo ‘Allo! in 2007, which reunited several members of the cast. He also starred in BBC sketch show Revolver in 2004.
“Gorden Kaye was a terrific comic actor whose signature role, Rene Artois, earned his place in the comedy hall of fame,” Shane Allen, controller of BBC comedy commissioning said.
“He was instrumental in making ‘Allo ‘Allo! such a long running and well-loved series. His work lives on and thoughts are with friends and loved ones at this sad time.”Advertisement