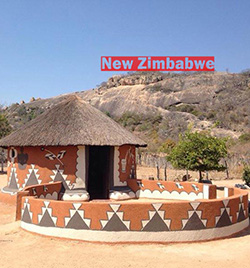 AMAGUGU International Heritage Centre in Matobo will this Friday host the My Beautiful Home Awards Ceremony which is aimed at promoting the tradition of hut painting.
The centre, located in the scenic Matobo area 60km along Bulawayo-Kezi road, is the brainchild of one of the country’s celebrated historians, Pathisa Nyathi.
It was opened in 2010 with the sole purpose of preserving and promoting indigenous culture and heritage.
Inaugurated in 2014, the My Beautiful Home competition seeks to revitalise traditional hut paining using natural pigments such as soil, water, ash and charcoal.
Expanded from wards 16 and 17 in 2014, the 2015 edition of the competition was conducted in wards 15, 16, 17, 18, 23, 24 and 25 in Matobo District.
A cumulative total of 312 entries were received from the seven wards.
In an interview with NewZimbabwe.com, Amagugu Heritage Trust programs manager, Butholezwe Nyathi spoke of the need to revive the practice.
“Hut painting is a traditional artistic expression that has for generations been practiced by women to enhance the aesthetic beauty of their homesteads,” said Nyathi.
“The paintings carry a lot of messages – that of family, love, conflict, hope, eternal life, nature and doom in equal measure.
“Hut painting is a skill and practice that has gradually been dissipating from the rural hinterland.
“Through the competition, Amagugu Heritage Trust seeks to revitalise the practice as a mechanism of recognising and appreciating the role of women in household and community development and preservation of cultural heritage in general.”

Prizes will be awarded to the best three huts across the seven wards in terms of interior, exterior and best environment. One award will be given to the most innovative design.
Recognising the high number of entries and the many captivating designs, the top ten winners in all the three categories will also be awarded, said Nyathi.
Prizes to be awarded range from water tanks, wheelbarrows, kitchen utensils, ploughs and solar lamps.
A positive spin-off from the ‘My Beautiful Home’ competition has been the improved cleanliness of homesteads, a development confirmed by local traditional leaders and health technicians.Advertisement