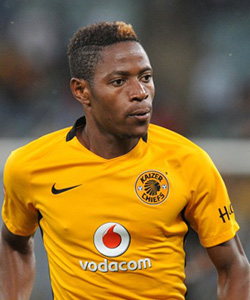 FORMER Chicken Inn and now Kaizer Chiefs forward, Michelle Katsvairo, is leaving the South African giants for the money spinning Tanzanian football scene on a one-year loan deal.
The development was confirmed by the South African premiership giants who said in a Tweeter post Thursday that the 27-year-old star was being loaned to Tanzanian top-flight side Singida United.
“Michelle Katsvairo has been loaned to Tanzanian side Singida United FC for a 1-year loan period (August 2017 – June 2018),” Chiefs said, ending months of speculation over the former Black Aces Academy product’s future with Amakhosi.
Singida United, who have never disguised their love for Zimbabwean imports, have confirmed they will be bringing the Warriors forward on board and will honour the contractual obligations that the player already has with Chiefs.
Life in the South African football scene has been tougher for the talented footballer who has not enjoyed as much game time as he would have wanted with the last time he played having been back in December 2016.
Singida United is already home to former Dynamos players Elisha Muroiwa and Wisdom Mutasa, former Caps United striker Simba Nhivi and Tafadzwa Kutinyu, formerly with Chicken Inn.
Tanzania itself is a newly-found destination for locals who would have failed to make a break into the South African football league or failed to settle in the illustrious competition.
Among Zimbabweans plying their trade in the East African country are former Highlanders left back Bruce Kangwa, former Caps United and Mamelodi Sundowns defender Method Mwanjali and former Platinum FC footballers Thabani Kamusoko and Donald Ngoma.
While Tanzania could be least of any Zimbabwean footballer’s dream leagues, those who have managed to secure contracts there rake in handsome salaries of up to US$8,000 per month plus signing-on fees paid up front.Advertisement