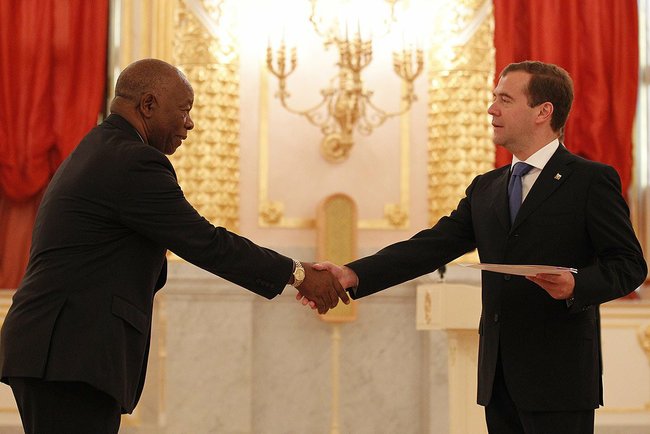 During his time when he was a diplomat...Ambassador Boniface Chidyausiku in Russia
Spread This News

FORMER Zimbabwe’s Ambassador to Russia, Boniface Guwa Chidyausiku has dragged his tenant to court after he refused to vacate his house in Harare’s low-density Marlborough suburb.

The tenant, Garikai Muzhiki also allegedly refused to pay rentals amounting $5 250 per month from August this year, bringing the total to $15 750.

Chidyausiku, who now resides at Mufenje Farm in Concession submitted that despite demand, Muzhiki refused to pay what was due to him and also refused to leave his house after serving his three month notice from June this year.

Muzhiki, who is currently occupying House No’ 7 Lamb Drive Marlborough, Harare which is stated as stand number 874, Marlborough Township in court papers.

The ex-diplomat was awarded stand No’ 874 Malborough Township of Strathmore.

He said the consent paper showed that the tenants shall be given three months’ notice to vacate the property and the notices were effective from June 2019 to August 2019.

On the 21st of August 2019, Chidyausiku, through his legal practitioners, gave adequate and due notice to his tenant to vacate the property and to pay rentals to him.

“Wherefore plaintiff prays that defendant and all those who claim occupation through him be evicted from stand 874 Marlborough Township of Strathmore also known as No. 7 James Lamb Drive, Marlborough, Harare.

“Plaintiff also prays that the defendant pays hold over damages in the sum of $5 250 per month from August 2019 to date of vacation,” reads the summons.