The dozen youths were wearing MDC t-shirts but their leader was identified as Taurai Kandishaya, alias Alex Gakanje, a known Zanu PF activist.

Moyo, once Information Minister and later moved to becoming Higher and Tertiary Education, was forced to flee the country November 2017 when the military seized control of the State and installed Emmerson Mnangagwa in then leader Robert Mugabe’s job.

He has since penned his book – Excelgate – which is an attempt by the ex-Zanu PF politburo member to expose how Mnangagwa and the military top brass rigged the 2018 national elections.

Some ambassadors from different countries, civil society leaders and other members of the country’s intelligentsia who attended the launch were forced to flee for their lives as the youths threatened to beat everyone up.

The marauding youths produced sjamboks from their satchels and went on to pull off the walls, the book launch posters, replacing them with those denouncing Moyo. 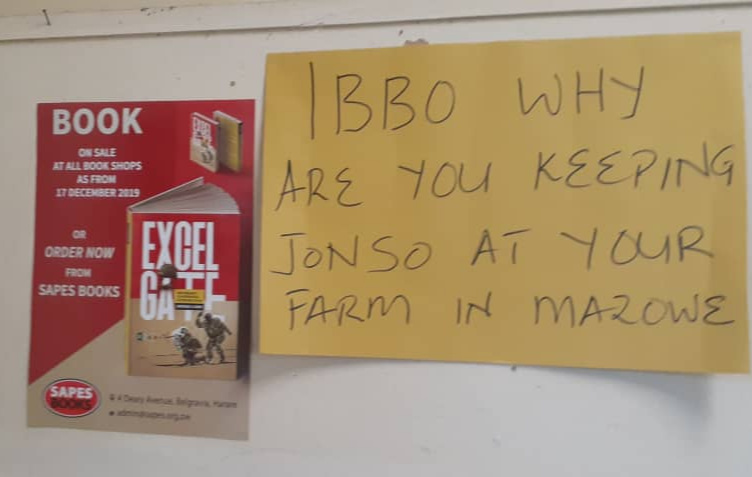 “So launch was disrupted by the same gang led by Alex Ncube: they arrived at 4:30 pm and began disrupting the venue, threatening violence with sticks and chains; ordered our guests – who included diplomats among them the EU, Swiss and Japanese to leave or face violence; the Police, who had agreed to come and protect the event never turned up, serving our man who had gone to Central to fetch Police details , with a letter stating that they cannot help us.

“For the safety of our guests and property, we have had to call off the launch again.”

In a separate interview with NewZimbabwe.com, Mandaza said he was “reliably informed that national police were given instructions from “certain quarters not to provide security”..”

Efforts to get a comment from Nyathi were unsuccessful.

“This is the second time that we had to stop the launch after such threat to violently disrupt the proceeding,” said Mandaza.

Posting on his Twitter late Tuesday, Moyo said the “regime enablers” were fighting hard to stop the launch and sale of his book.

“Regime enablers at the National Archives sabotaged the distribution of Excelegate on platforms such as @amazon by not activating the book’s ISBN Number on its database to reflect internationally, yet it was purchased and issued on the 23rd September 2019,” he posted.

In his book, the once Zanu PF strategist also reveals the role of the Joint Operations Command (JOC) in the country’s political system and its role in deciding who takes State power.

Moyo said most ministers and politburo members were in the dark on how elections were rigged.