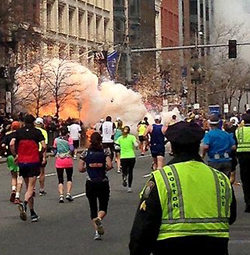 JUST as there are good dictators and bad dictators in Washington’s eyes, there are also good terrorists and bad terrorists: Al Qaeda in Iraq, bad. Al Qaeda in Syria, good. Al Qaeda in Mali, bad. Al Qaeda in Libya, good, now bad.
This hypocrisy manifests itself most acutely in how western media reports on the victims of terror. On the same day as the recent Boston Marathon bombings, at least 75 people were killed in Iraq and more than 250 injured by a series of car bombs.
Al Qaeda in Iraq has claimed responsibility for the car bombings and within minutes of the bombings in Boston, western media outlets, politicians and security experts all hastily concluded that Islamic terror was to blame. This is despite the fact that according to the FBI, only 6% of terror attacks on US soil are by Muslims. In fact, Jewish extremists committed more terror attacks in the US than Muslims over the last three decades. Yet notice the disparity in media coverage between the two.
Muslims constitute 1% of the US population, but they are 13 percent of the victims of religious-based hate crimes. Clearly, Muslims at home and abroad are disproportionately the victims of terrorism. Yet in the media there is an outpouring of rage and condemnation whenever western citizens are killed, while reports of more frequent Muslim deaths are muted. In the western media, there would appear to be a distinct Hierarchy of Human Life.
America’s policy of openly backing Islamic terrorist groups stems largely from the Cold War era. Back then, America saw the world in rather simple terms: on one side the Soviet Union and Third World nationalism, which America regarded as a Soviet tool; on the other side Western nations and militant political Islam, which America considered an ally in the struggle against the Soviet Union. The director of the National Security Agency under Ronald Reagan, General William Odom recently remarked that “by any measure the US has long used terrorism. In 1978-79 the Senate was trying to pass a law against international terrorism – in every version they produced, the lawyers said the US would be in violation.”
The CIA used the Muslim Brotherhood in Egypt as a barrier both to Soviet expansion and to the spread of Marxist ideology among the Arab masses. The United States also openly supported the Sarekat Islam against Sukarno in Indonesia and the Jamaat-e-Islami against Zulfiqar Ali Bhutto in Pakistan. Last but certainly not least there is Al-Qaeda. Lest we forget, Bin Laden was trained,Advertisement

Former British Foreign Secretary Robin Cook admitted that “Al-Qaeda, literally ‘the database’, was originally the computer file of the thousands of Mujahideen who were recruited and trained with help from the CIA to defeat the Russians.”
America’s relationship with Al Qaeda has always been a love-hate affair. Depending on whether a terrorist group in a given region furthers American interests or not, the State Department either funds or aggressively targets that terrorist group, typically with drones.
American anti-terrorist operations and drones are reported to have killed at least 4,700 people over the last decade, the vast majority of whom were innocent men, women and children. For every innocent civilian killed by an American drone strike, there are hundreds of grieving relatives that will inevitably resent America, any number of whom may turn to militant Islam and terrorism.
Truth is, American anti-terrorist operations are only creating more anti-American terrorists. The best that force can do is impose order. It can never elicit harmony. Therefore, a “war on terror” is flawed in theory and disastrous in practice. The war on terror has made Al Qaeda much stronger than it was on 9/11. In fact, the more Washington emphasises war and confrontation, the more it silences moderate voices in the Muslim world who want to speak up for cooperation.
Quite aside from creating more terrorists than it kills, America’s war on terror also has the unintended consequence of slowly but surely bankrupting the nation. Terrorist attacks on US soil embolden the right wing elements of the military industrial complex and the resulting military actions by these right wing elements embolden terrorists further. It is this vicious cycle of war and terror that future historians may well consider to be one of the key elements that precipitated the decline of the great capitalist American Empire.
Adam Smith, the grandfather of capitalism was a staunch anti-imperialist. He argued that imperialism is costly and eventually bankrupts the country. In fact, one year of the US military budget is equal to more than $20,000 per hour for every hour since Jesus Christ was born. The monumental expansion of US military bases across the globe, in the name of counter-terrorism, illustrates the degree to which America’s treasury is being overstretched by the military industrial elite who commandeer the purse strings.
As Will Blum has pointed out, following the bombing of Iraq, the US wound up with military bases in Saudi Arabia, Kuwait, Bahrain, Qatar, Oman and the United Arab Emirates. Following the bombing of Yugoslavia, the US wound up with military bases in Hungary, Macedonia, Bosnia and Croatia, Kosovo and Albania. Following the recent bombing of Afghanistan, the US is now winding up with bases in Afghanistan, Pakistan, Kazakhstan, Uzbekistan and Tajikistan.
Much like late stage ancient Rome and the barbarians, Washington is over-stretching and over-extending itself in the name of terrorists. Like Rome, the hubris of Washington’s politicians and the gung-ho nature of its generals are threatening the empire. The three interconnected forces that destroy empires – lack of money, military over-reach and the catastrophic loss of self-confidence that stems from the other two – seem to have coalesced around America with astonishing speed since the Twin Towers tragically fell.
Garikai Chengu is a Fellow of Harvard University’s Du Bois Institute for African Research. Garikai can be contacted at chengu@fas.harvard.edu