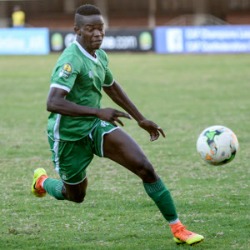 CAPS United stunned Zamalek 3-1 in their 2017 Caf Champions League, Group B match at the National Sports Stadium in Harare, Zimbabwe, on Sunday.
The victory takes the Zimbabwean club to the third spot on the Group B standings, while Egyptian giants Zamalek slip down to the fourth spot.
The hosts were the better side in the opening 15 minutes of the encounter as they played good crosses into the White Knights box.
Ahmed El-Shennawy, the Zamalek keeper, came off his line to gather Ronald Chitiyo’s cross, before punching away Ronald Pfumbidzai’s curling corner-kick.Advertisement

Zamalek did threaten in the 21st minute when Stanley Ohawuchi forced CAPS keeper Prosper Chigumba into a low save with a shot from outside the box.
But it was the Green Machine who broke the deadlock when Pfumbidzai pounced from close range and he made it 1-0 to CAPS with a low shot in the 31st minute.
It was nearly 2-0 to CAPS in the 40th minute, but El-Shennawy made a great save to deny Chitiyo at his near-post following a good move by the Green Machine.
However, Ohawuchi levelled matters three minutes later when he beat CAPS keeper Prosper Chigumba from a one-on-one situation to make it 1-1.
The Nigerian striker’s goal ensured that the first half ended with CAPS and Zamalek locked at 1-1.
Brian Amidu, the CAPS striker, should have restore his side’s lead 11 minutes after the restart, but El-Shennawy produced a fine low save to deny him.
Zamalek coach Agusto Inacio made the second change of the game in the 65th minute – introducing Salah Rico as the visitors looked to regain control of the match.
However, the Green Machine restored their lead 10 minutes later when Amidu controlled the ball in the Zamalek box, before scoring to make it 2-1 to CAPS.
The momentum was with the White Knights in the closing stages of the match as they searched for the equaliser.
Zamalek’s second-half substitute Mostafa Fathi’s long-range attempt was saved by Chigumba as the CAPS keeper denied the visitors.
However, Zamalek were left vulnerable at the back and Amidu punished them as he beat El-Shennawy from a one-on-one situation – sealing CAPS’ 3-1 win.
CAPS (1) 3 (Pfumbidzai 31, B.Amidu 75′, 93′)
Zamalek (1) 1 (Ohawuchi 43′)
United: