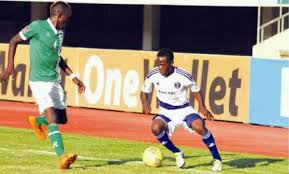 The transfer window opened on July 1 and will close at the end of the month, thus offering clubs an opportunity to beef up or release some players they believe are not helping their cause.

And reports on Wednesday suggested, Dynamos have tabled an offer to Amidu who is one of the players on their shopping list as the league programme resumes after a two-week break.

Amidu has struggled to hold down a first team shirt with the champions since he decided to switch to the Zvishavane based side and is reported to have expressed his willingness to return to the club which can guarantee him game time.

“At the moment, he is not considering anything other than playing football. He is desperate to play, remember he has not been involved much at FC Platinum. Brett is not the kind of player who is interested in zeros. He simply wants to play and this has motivated him to consider coming back,” said a source close to the negotiations.

FC Platinum spokesperson Chido Chizondo confirmed talks were under way. “Yes, there are talks going on. They (Dynamos) want the player on loan so we have written to them stating the amount for the loan deal and we are still to get a response from them,” she said.

FC Platinum have already released Hillary Bakacheza and Nigel Papius to Triangle and Shabanie Mine respectively on loan deals.

Amidu left the Harare giants at the start of the 2017 season to join the Zvishavane outfit on a three year deal.  He now has six months left on his current deal with FC Platinum.

Dynamos, who have lost Raphael Manuvire, are desperate to replace him with Amidu while former Hobro IK midfielder Tanaka Chinyahara and Farai Mupasiri have also been linked with a move to the Harare giants.

The Glamour Boys have also sounded out Cameroonian striker Christian Ntouba Epoupa as they seek to bring him back after the two parties fell out over outstanding payments.

Epoupa ditched Dynamos at the start of the season due to frustrations over his troubled employer’s failure to pay him his dues as promised.

However, with the new administration led by banker, Isiah Mupfurutsa now in place, efforts have been made to reconcile with the lethal striker.

The Cameroonian top scored for the Glamour Boys last term with 12 goals in a season in which they were unfortunate to be beaten to the title by FC Platinum on the very last day of the premiership race to finish in second place.