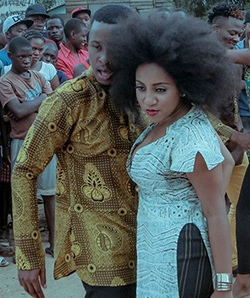 HARARE based musicians Ammara Brown and Tytan have unleashed a the widely anticipated video for the chart topping collaborative single ‘MUKOKO’ this week – and its hot!
The monster hit produced by UK based hit-maker, Jusa Dementor (Cynthia Mare, Soul Afrika, Red Rat, Alexandra Burke) is fresh from holding the number 1 spot on both StarFM and ZiFM Stereo.
The accompanying visual, directed by Mr Elders brings to life a flirtatious love song with tongue-in-cheek play on words.
Shot on location in the township of Mbare, the video features choreography by John Cole and showcases Tytan as a man in search of “Mukoko” a word for a bee hive which can also metaphorically mean a good heart/sweetheart.
Ammara responds to this search by declaring she is much more than the average girl and invites him to taste the honey (sweetness) within and treasure it; as a bee hive contains all the sweetness of honey, the heart of a good woman can too.

The response to both the track and the video has been instant. Since Tuesday, it has had almost 100K views across Youtube and Facebook with great reviews across the Zimbabwean media.
Outside of the country, the track has already received support from BBC Radio 1/1Xtra DJ Edu who describes it as “a big tune with crossover potential”.
It is one of the highlighted tracks to feature in a forthcoming Zim-focused special running on his award-winning Destination Africa show airing on April 17.
Fans of Ammara can expect a follow-up video for her single – Next Lifetime, featuring legendary South African musician Hugh Masekela whilst Tytan is gearing up to release his debut.
Advertisement