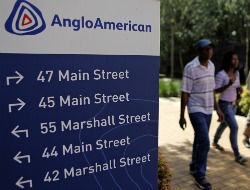 ANGLO American Platinum said on Friday it would cut 6,000 South African mining jobs, fewer than half the 14,000 initially proposed, as it tries to restore profits without provoking a backlash from the government and restive unions.
The world’s top platinum producer, a unit of Anglo American, added it would also keep open one of four shafts slated for closure near the platinum belt city of Rustenburg.
Amplats aims to slash platinum production by 10 percent or 250,000 ounces this year, equal to 4.5 percent of global output. Another 100,000 ounces will go in the medium term.
Under an original plan announced in January, it aimed to cut output by 400,000 ounces. The reduced job losses are likely to soften the blow for the African National Congress (ANC) government, which faces an election next year, but it remains to be seen if it appeases the anger of powerful local unions.
“Everyone is surprised. We were not expecting any retrenchment at all. We can’t allow this,” Sphamandla Makhanya, a worker committee member at Amplats in Rustenburg told Reuters. “But before we do anything, we are going to have a mass meeting with the workers to decide what to do next.”
For Amplats, reining in costs and cutting output to underpin the price of platinum, used for emissions-capping catalytic converters in vehicles, is crucial to getting back to profit.
The company said it would now aim to produce 2.2 to 2.4 million ounces a year, up from the 2.1 to 2.3 million ounces targeted in the original plan. The revisions should deliver 3.8 billion rand ($423 million) in savings by 2015.
“This is a significant step back to where we were and it doesn’t feel like it addresses the radical problem of oversupply of material, weak or deteriorating demand environment,” said analyst Paul Gait of Sanford Bernstein in London.
“The positive is this is an undoubted improvement from the kind of announcement we used to have from Anglo Platinum, which was a blithe disregard for market fundamentals, the cost base of their production – and a single minded focus on producing.”
Amplats’ shares extended losses on the day to be almost 3 percent lower in mid-afternoon trade in Johannesburg.
Sources told Reuters last week the plan would be watered down after talks with the government.
Chief Executive Chris Griffith said the company would discuss it with unions over the next two to three months.
He signaled the jobs target could be reached over time, saying on a call with analysts the company would look at reducing numbers by as much as 3,000 to 4,000 a year through attrition and would consider proposing early retirement for 1,500 employees over the age of 55.Advertisement

Some older workers around Rustenburg on Friday said they were ready to hang up their tools.
Dressed in white overalls, Karel Mokgoatsi, a rock driller at Khomanani, one of the affected mines, said: “For others this will be bad news but for me it is good news. I am 60 years old and I am ready to go and have some rest.”
Vow to fight
Hours before the announcement, activists from the militant Association of Mineworkers and Construction Union (AMCU) in Rustenburg said they would not tolerate any job losses.
“Where will 6,000 people in this economy go? They will engage in criminality,” said Simon Hlongwane, an AMCU branch secretary at Amplats. “We as AMCU stand ready to fight.”
Social tensions are running high after violence rooted in a labor turf war between AMCU and the dominant National Union of Mineworkers (NUM) killed more than 50 people last year and provoked illegal strikes that hit production.
The unrest was a major reason why Amplats suffered its first loss last year. But with unemployment at more than 25 percent, the government has taken a strong line with Amplats.
The average South African mineworker has eight dependants, so the social and political consequences even of reduced lay-offs will be far reaching.
AMCU miners briefly closed several mines when the initial Amplats plan was unveiled in January. Its leaders said on Thursday they would not back such wildcat strike action.
AMCU emerged as the dominant union in the platinum shafts after it poached tens of thousands of disgruntled members from NUM, a political ally of the ruling African National Congress.
The union power struggle explains why the ANC and the government have dug in on the proposed Amplats cuts, a striking contrast to the past when the gold industry was allowed to cut tens of thousands of jobs to remain viable.
General elections are due next year, and for the ANC, the union war means it has lost tens of thousands of potential voters and their many dependants as the NUM is a vehicle for campaigning and getting out the working class vote.