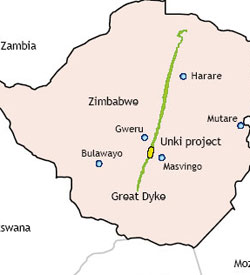 BULAWAYO: The world’s largest platinum producer Anglo American Platinum says it expects to finish the construction of a platinum smelter at its Zimbabwean unit in Shurugwi by the second half of next year.
The company announced in its integrated report for 2016 released on Wednesday that construction of the smelter was on target.
“Construction of a smelter at Unki in compliance with beneficiation requirements is progressing, with construction expected to be complete in the second half of 2018,” the company said.
The Zimbabwe Government deferred a proposed 15 percent tax exports of unprocessed platinum to 1 January 2018 to give platinum companies that chance to set up smelters locally.
Zimbabwe want to beneficiate its minerals to ensure that it draws maximum benefit locally and create opportunities for employment.
Another major platinum miner, Zimplats whose majority shareholder is South African Amplats has also indicated that it is in the process of constructing a smelter.
On indigenisation, Anglo American said it was still waiting for government to come up with a way forward after President Robert Mugabe in April 2016 made a clarification on the policy.
“In terms of the statement (issued by President Mugabe) existing mining companies such as Unki would achieve compliance with the indigenisation requirements through ensuring that at least 75% of gross sales proceeds are spent and retained in Zimbabwe.
“The statement concluded by stating that President Mugabe had directed that the indigenisation legislation be amended to comply with this latest position. Amendments to the Indigenisation Act are yet to be made,” noted the company.
The company last month announced that platinum production at Unki Mine went up 12 percent to 75,000 ounces in 2016 largely due to higher tonnage mined.Advertisement