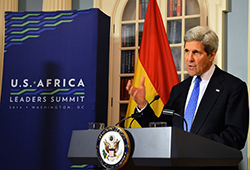 CORNELL West once said, the trouble with black people is that, we don’t see ourselves as authentic human beings with our own cultures and traditions worthy of respect and reverence. Instead, we see ourselves through the mishmash of ideas that have been presented to us and these inform our collective identity.
The African leaders’ summit in Washington signals the beginning of the end of the Pan African ideals; ideals and a way of seeing the world that our mothers, fathers and grandparents grew up with. Ideals inspired by Mbiko, Kwame, Kenyatta, Sobukwe, Nelson Mandela, Govan Mbeki and Kenya’s Oginga Odinga which told us that we were all right the way we are and our diversity not only made us stronger  but, it is the source of our wisdom and pride.
As it is we are losing the ideological battle. We are losing our place because there is no longer a vision of African ideology. Africa, as a continent, is seduced by economic models that will result in the mass and wholesale of African resources and the carving up of the continent.
There seems to be no alternative because everyone is saying the same thing which for the most part, does not reflect our own thinking. It’s a tragedy because the struggles of the 60’s, 70’s and 80’s where supposed to bring social progress, African economic prosperity and improvement in the standard of living for most Africans.
The loss of the Economic vision means that, as a continent, we are failing politically to put or mark in the world and that is because our leaders are not learning from the past and have no clear vision of the future. They just see things from a short term perspective. There is no longer a concrete and well-articulated African project and one might argue that, the AU can have all the institutions, all the mandates it can create but, if it does not have a collective and well-articulated vision for the future then it is pointless.
As it is, according to the Mail guardian (South Africa) and the Guardian (UK), Africa lost up to $1.4tln in illicit financial flows between 1980-2009 and Africa loses an estimated $62.2bn (£40bn) in illegal outflows and price manipulation every year. Kofi Annan stated that, “Africa loses twice as much in illicit financial outflows as it receives in international aid”.
Furthermore, in his foreword to the 120-page report on African progress he also concluded that, “It is unconscionable that some companies, often supported by dishonest officials, are using unethical tax avoidance, transfer pricing and anonymous company ownership to maximize their profits, while millions of Africans go without adequate nutrition, health and education.” (The Guardian UK).Advertisement

I don’t know what was more hurtful, the fact that Joe Biden vice president of the US referred to Africa as a nation! Or the fact that the African Union has literally not organized African countries in a way that would allow them to negotiate for more equitable economic relationships with the East and the West. It is true Africa needs investment; it’s true Africa needs infrastructure but I feel not on these terms.  There is no reason why Makerere University should not have been at the fore front in creating an intellectual and ideological back bone that would allow Africa to participate in the global economy on its own terms.
Seeing our leaders all lining up for a photo opportunity with President Obama and not a state dinner with Obama made me realize that, We want to be American, We want to be European, We want to be Chinese but we don’t want to be Africans because all we are doing is mimicking and not setting our own tone to this ideological battle.