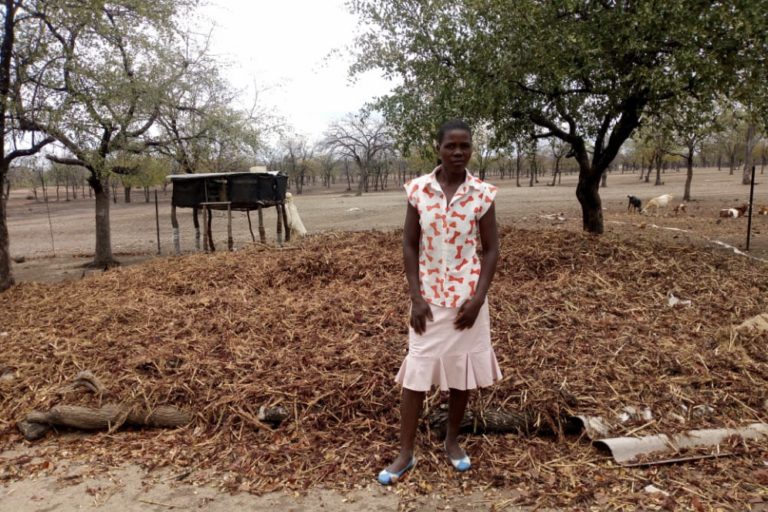 Elizabeth Munene in front of her cattle feeds.
Spread This News

“We were taught that deforestation affected our environment. The punishment for such a crime is to give a goat to the local village head. This sets an example that such a practice is an abomination in the area. Instead of cutting down the whole tree, we prune its branches,” said the mother of two, who hails from the minority Shangaan tribe that has lived in the area for years.

Previously, she and many other villagers relied on firewood to cook, as well as paraffin-fueled lamps for lighting. Now, she has installed solar panels at her home as her source of energy for cooking and electricity. With a solar-powered stove, she is among the lucky few in her village as others rely on firewood for cooking.

“I was taught that solar power is a clean and smart energy that does not cause pollution, which adds to climate change,” she said.

However, for Munene and about 12,500 villagers in the area, their efforts of sustainably conserving their land may be in vain as they face possible eviction for an irrigation scheme that will clear 12,940 hectares (31,975 acres) of trees.

“We have been living in suspense,” said Magaret Muhlava, an elderly villager, visibly emotional as she described how the government informed them they were to be relocated for an alfalfa plantation that would supply a dairy company, Dendairy.

“We were informed at several meetings, but we were not told where we are going, as well as if we are going to be compensated. We are now not sure whether to plant our crops for the next season as we can be moved anytime,” Muhlava said.

Dendairy is based in the town of Kwekwe in Midlands province, the hometown of Zimbabwean President Emmerson Mnangagwa. The company is owned by the Coetzee family, which has close links with Mnangagwa.

In 2016, Mnangagwa publicly revealed during the funeral service for family matriarch Estelle Theresa Coetzee that he had personally blocked the government from repossessing the Coetzee farm in the area and protected the family.

His ruling Zimbabwe African National Union-Patriotic Front (Zanu PF) party was at the time in the process of seizing white-owned farms and redistributing the land to black farmers amid strained racial tensions in the country.

In March 2021, the government issued a pair of regulations that allocated land for growing alfalfa, a common cattle fodder also known as lucerne grass. The orders called for evicting villagers from the allocated land, but did not identify any resettlement locations or compensation for the affected villagers.

In response, the Chilonga villagers, with the help of the Zimbabwe Environmental Lawyers Association (ZELA) and the Centre for Natural Resource Governance (CNRG), filed a High Court interdict to stop the government and the company from evicting them. They said the displacement would deprive them of their sacred religious sites and their ancestral land.

The court blocked the eviction of the villagers on an interim basis and the government repealed one of the regulations, which had called for the alfalfa cultivation, but maintained the other, which calls for the eviction of the villagers. This displacement is permitted by the country’s Communal Lands Act. The government also changed the land-use acquisition from alfalfa cultivation to an irrigation scheme, and maintained that part of the land would be used for crop production and another part for Dendairy’s cattle pastures.

CNRG director Farai Maguwu said their court challenge achieved to stop the government from relocating the villagers – for now.

“Our court challenge sought to expose the unconstitutionality and inhumanity of the Communal Lands Act. This gave the villagers a reprieve, but the threat still remains,” said Maguwu.

Communal lands rights in Zimbabwe are vested in the President who decides how it is to be used and occupied. Issues arise when the government decides that a strip of land can be of commercial value. Those using the land are ordered to depart and threatened with imprisonment if they fail to leave by the stipulated date. The law does not ask for the government to consult the people affected.

“This virtually reduces more than 70% of Zimbabweans to squatters on the President’s land,” Maguwu said, referring to those who live in rural areas.

The government did not give a time frame for implementing the project and has lately remained silent on the topic.

The regulation governing the irrigation scheme calls for clearing a vast swath of woodland that’s home to mopane (Colophospermum mopane) and baobab (Adansonia digitata) trees. This is expected to disturb the natural habitats of birds such as hornbills and poses consequences for the biodiversity of the ecosystem.

Deep ties to the region’s biodiversity

The villagers of Chilonga have conserved the biodiverse area for centuries through sustainable agricultural practices. These include avoiding stream bank cultivation to stop silting the nearby Runde River, rotating crops to improve soil fertility; using organic fertilizers; stopping veld fires that destroy vast swaths of forests and grasslands in Southern Africa; as well as assigning separate areas for settlement, fields and pastures to manage resources.

“The mopane tree leaves provide rich vitamins for our cattle and goats; and the baobab trees house nests for hornbill birds, other rare bird species as well as endemic small animals like squirrels, snakes and rabbits,” said Enock Piki, from Chipinda village, whose parents settled in the area in 1963. “These will become endangered if deprived of their natural habitats by the irrigation scheme’s clearing of the land.

“We rely on hornbill birds for weather forecasting,” Piki added. “When we hear them crying while flying to the east in groups, usually in October, we know that the rains are nearby, and we start dry planting. The sacred birds have never failed us as we study them. If in one year we do not see them or hear them crying, we know that there is going to be a drought.”

The villagers also have an environmental committee to ensure compliance. The committee’s six members advocate for adherence to the environmental laws, like avoiding veld fires and indiscriminately cutting down trees. The committee reports defaulters to the village head, who may take up the issue in the traditional courts or the criminal courts.

Dendairy managing director Daryl Archibald declined to say how the company will operate without harming the environment, though he initially promised to respond to questions sent by Mongabay. He did not respond to follow-up calls.

Mangaliso Ndlovu, the environment minister, said any company set to do business must undertake an environmental impact assessment (EIA).

“The EIA sets guidelines on how business ventures should operate while being in harmony with the environment,” Ndlovu said. “Any organization that does not abide by the environmental laws is fined. Everything to do with how a company will not cause environmental degradation, or siltation, among other environmental ills, is covered in the EIA, which will be quarterly assessed.”

However, he said he’s not aware of whether Dendairy has applied for an EIA certificate — a requirement before they start operations.

A memory from the past

The villagers say this is not the first time their environment has been scarred by human activity, which is why they’ve sprung to its defense.

“Our region was once affected by deforestation when refugees who settled at Chambuta camp started indiscriminately cutting down trees and selling firewood to nearby urban areas,” said William Samu, from Chibwedziva village. “Our vegetation was cleared. That was around 1988 to 1993. Portions of the area turned into a desert, and there were just a few rare bird species like the swee waxbills [Coccopygia melanotis] and black saw-wings [Psalidoprocne pristoptera] that were left.”

This was when they decided to instate separate areas for fields, cattle grazing and homesteads.

“We thatch our huts with grass from the ridges from the fields, while the dark clay soils provide mud for decorating our huts,” Samu said. “Some survive on selling grass for thatching huts or gazebos. It is our hope that our environment is not scarred again, this time by the irrigation scheme.”