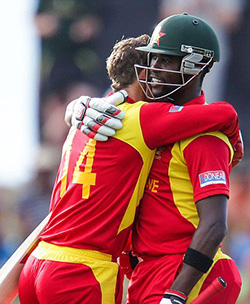 THE English came, colonised us and bequeathed us a great many traditions of theirs. There is the general love of tea in coffee`s stead, in this part of the continent; the use of the metric measurement system in place of the imperial system of measurement used by the Brits` trans-Atlantic cousins in America.
Then there is the gentlemen`s game of cricket and Zimbabwe is one of the few African countries that where this sport, often branded with an ‘elitist’ tag, has taken root and enjoyed significant popularity.
As it turns out, the British would be ‘the gift that keeps on giving’, and they produced one fine poet in Edmund Charles Blunden. Captivated by the glorious game of cricket, it was he who said, “Cricket to us was more than play, it was worship in the summer sun.” And this rings true for the sizeable portion of Zimbabwe`s population that ardently follows the game of cricket with passion and enthusiasm. To them, cricket is more than just a game; it is an experience and a way of life.
Though they have received a raw deal, in terms of results posted by the national side over the years, people still make their way to Queens Sports Club in Bulawayo and Harare Sports Club whenever the national side is playing. To the keen observer, the supporters are in it, boots and all – as the proverbial saying goes – donning their national colours and waving the Zimbabwe flag sky-high.
It must be pretty gut-wrenching being a Zimbabwean cricket supporter; so much expectation and promise, yet on the field where it really counts, the team delivers a poor string of results. The national side is generally as unreliable as the service from our friends over at ZESA – Zimbabwe`s electricity utility.
Take for instance, their opening game of this year’s World Cup, currently underway in Australia and New Zealand. Zimbabwe matched South Africa toe-to-toe and displayed great skill and effort as they narrowly lost to the Proteas, who are arguably one of the best sides in world cricket right now – barring of course their regular ‘choking’ in pressure moments of international tournaments.
What followed was a win over the UAE, albeit laboured and then the massacre suffered at Chris Gayle`s hands in the West Indies game.
Advertisement

Then there are the matches against Pakistan and Ireland when Zimbabwe literally snatched defeat from the jaws of victory, losing by slender margins of 20 runs and 5 runs respectively. This effectively shut the curtains on Zimbabwe`s World Cup campaign as they were exposed to have brought knives to gun fights.
But spare a moment for the Zimbabwean cricket supporter! More of the same old average, inconsistent and disastrous performances at major cricket tournaments served on a platter – toppings and all. Ask Brendon Taylor, one of the most senior players in the team why this is so, and he will pin it on the mental scars Zimbabwe`s dressing room has. Makes sense for a side who have tasted victory, nearly as much as the Herald (Zimbabwe`s state run newspaper) has ever written a good thing about opposition leader Morgan Tsvangirai – once in a blue moon.
Back to square one then, as Zimbabwe proceed to play a dead rubber match against the indomitable Indians, and boy, have we been on that first square a lot. For some players, this might be their last World Cup appearance due to age and several other factors. And, unfortunately, what is now being passed down to the next generation of players is a hollow legacy of nothingness.
Consider the young Australian debutant putting on the ‘baggy green’ for the very first time. Immediately, memories of players like Mathew Hayden, Adam Gilchrist and Ricky Ponting dominating opposition bowling attacks or those of the potent bowling attacks of legendary Glenn McGrath and Shane Warne, as the Aussies rose to the pinnacle of world cricket race through his mind. ‘Howzat’ for some inspiration? Sadly, no such luck for the next Tinashe Panyangara.
The Zimbabwean side definitely did not do themselves any favours in the Caribbean showpiece. In fact, they only gave more ammunition to the camp calling for Zimbabwe to lose its automatic qualifying spot to countries like Ireland. Taking some positives though, new coach Dave Whatmore, has previously won the World Cup as a coach and hopefully, his winning attitude will be contagious in the team`s dressing room and help patch up those “mental scars.”
And as Zimbabwe cricket goes back to the drawing board; both the administration and the players must remember that to some, as in the words of Edmund Charles Blunden, cricket is more than just play!