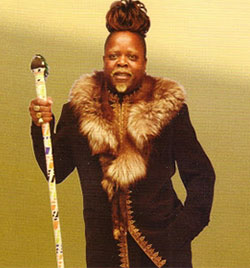 TO anyone who saw Searching for Sugar Man, the scenario is familiar: Musician makes records that generate local buzz but don’t translate into massive stardom. Musician continues working but extremely under the radar, eventually finding a day job in another field entirely. Musician is rediscovered by a new generation and receives belated recognition. But here’s the twist: Could the next Rodriguez come from … South Africa?
At a studio in Johannesburg in 1994, Afrobeat producer Joseph Shirimani was approached by the studio janitor, who hailed from the province of Limpopo in northern South Africa. The janitor, it turned out, said he wanted to work with him. “I said, ‘Can you sing?'” Shirimani recalls. “He didn’t say yes — he just sang a song for me. And that’s when I heard this unusual voice and those melodies.”
Together, Shirimani and the cleaning man — who called himself Penny Penny — wound up cutting several songs, including “Shaka Bundu.” That song, an example of Tsonga (or Shangaan) Afro-disco, updated traditional African music with synthesizers, electric guitars, and disco or house beats. Released in 1994, “Shaka Bundu” went on to sell 250,000 copies in South Africa and made Penny Penny a star—but only in that part of the world.
PENNY PENNY – Shaka Bhndu