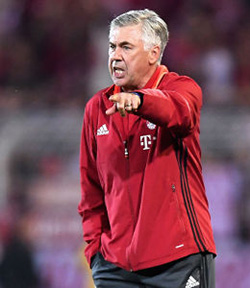 GERMANY: Bayern Munich coach Carlo Ancelotti has been asked to explain how he lost his calm and stuck a finger up at a group of Hertha Berlin fans at the weekend.
The German Football Federation have asked the usually affable Ancelotti to explain his behaviour in an exchange with Hertha fans while going down the tunnel after Bayern earned a late 1-1 draw in Berlin.
“Ancelotti has been asked to submit a statement on the events that transpired after FC Bayern’s match at Hertha Berlin on Saturday,” a Bayern Munich statement said on Monday.
“The FC Bayern head coach will of course comply with this request.”
Ancelotti said on Sunday he had suffered a rush of blood to the head after he was spat upon.
“Yes, I made that gesture after I was spat on,” the former Real Madrid, Chelsea and PSG coach admitted to German TV channel ARD, shortly after his charges had scored a 96th-minute equaliser.Advertisement