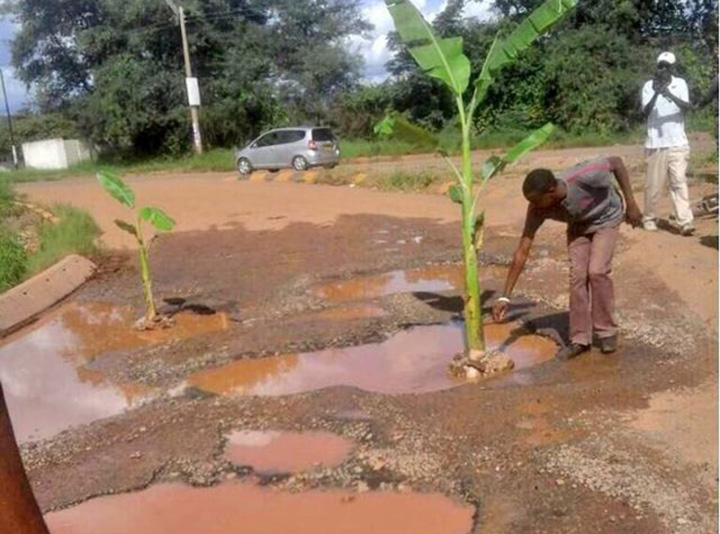 THE Central Intelligence Organisation (CIO) has summoned and ordered activists from a Kadoma-based NGO to submit a report stating why they embarked on a recent protest they dramatised with the mock planting of banana trees in the potholes of a local road.

The protest by the youth-based Vision Africa group was aimed at drawing the authorities’ attention on the deteriorating state of a major road inside the town.

Images of the banana plants on the road went viral on social media and the impact of the campaign was almost instant as town authorities moved with speed to mend the damaged parts of the road.

However, while the protest was popular with residents, it turned out that the State was not overly impressed as the civic group’s leaders were soon summoned by the ZRP’s Police Internal Security Intelligence (PISI) which questioned but did not prefer any charges against them.

But on Monday this week, the CIO summoned the group’s leaders from whom they demanded a written report on what they were “up to”.

Vision Africa director, Trinity Matendere confirmed the development in telephone interview from his base in Kadoma.

“We were called by the CIO using numbers which were we already knew belonged to the Presidential Office and they also introduced themselves as such,” said Matendere who gave the concerned number as 06822122720.

“They demanded to know what we were up to and then ordered us to bring a written report on all our activities.”

Vision Africa has also been engaged in a campaign around youth eligibility to run for public office.

Matendere said they chose the cheeky method of protest after their earlier demands on the authorities to repair the road and avert possible road accidents had fallen on deaf ears.

Douglas Coltart, who is part of a broader team of legal practitioners from the Zimbabwe Lawyers for Human Rights (ZLHR) who provide legal advice to the activists, slammed the state’s high-handed approach to the group’s action.

“It’s concerning because this is precisely the modus operandi that was present during the (former President Robert) Mugabe era,” he said.

“These are intimidatory tactics where people from the President’s office demand reports and information and interrogations of ordinary citizens who are just simply exercising their rights.