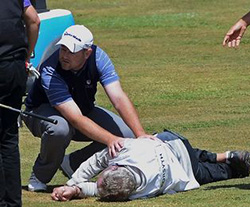 CADDIE Iain McGregor died from a suspected heart attack at the Madeira Islands Open on Sunday, prompting anger that the event was not called off as a mark of respect.
Zimbabwe-born McGregor, 52, who was caddying for Scotland’s Alastair Forsyth, collapsed on the ninth hole at the Clube de Golf do Santo da Serra.
The decision to continue playing the event, which had been reduced to 36 holes after three days ruined by heavy fog, was criticised by a series of players.
“Can’t believe they are going to keep playing in Madeira … Life is more important than golf…#RIPmac,” tweeted Spain’s Pablo Larrazabal.
Sweden’s Joel Sjoholm and Finland’s Mikko Ilonen also criticised the decision.
“Can’t believe that they are sending out players to finish the 2nd and final round when someone just died on the course,” tweeted Sjoholm.
Ilonen wrote: “Call it off NOW European Tour. Have some respect please.”
But Forsyth insisted that McGregor would have wanted the tournament to carry on.
“Everybody is in shock,” said Forsyth who completed the event. To see that happen to someone in front of your eyes — I don’t know how or when you get over that.
“Myself and playing partners Adam (Gee) and Tano (Goya) met officials and spoke to (EPGA chief executive) George O’Grady on the phone before taking the decision to play on, because we felt that was what Mac would have wanted.
“He was a guy I’ve known for 15 years and was very popular amongst the caddies. Obviously my thoughts go out to his family at this time. For something like this to happen so suddenly is so sad.
“He was far too young for this to happen. He was the life and soul of the caddies’ lounge and a nice guy who will be sorely missed. I’m absolutely numb.”
The European Tour released a statement saying that players and caddies had been consulted before the decision was taken to keep playing the tournament.
“Following consultation with the players and caddies involved, it was decided that play should continue and the tournament should finish,” said the statement.
“A minute’s silence has taken place at the clubhouse and play resumed at 6.00pm local time.”
Nicknamed Zim Mac because of his Zimbabwean roots, McGregor was a good amateur golfer in his youth playing off scratch, he nearly turned pro himself as a number of friends did, but decided to get a “real job” and became a carpenter, once he gained his qualifications he set up his own business and forgot about becoming a pro.Advertisement

A number of years later one of those old amateur friends asked him to caddie for them on the Safari tour which is now the Sunshine tour in Africa. He caddied for him and a number of others over a few years.
In 1999 after some serious discussions at home he travelled to Europe with £400.00 to his name to embark on a career as a fulltime caddie. He stood in the car park at Penina Golf Club at the Portuguese Open and got his first ever European tour bag, with Katsuyoshi Tomori.
Since then he had worked on the European tour and lived in Annan, Scotland.