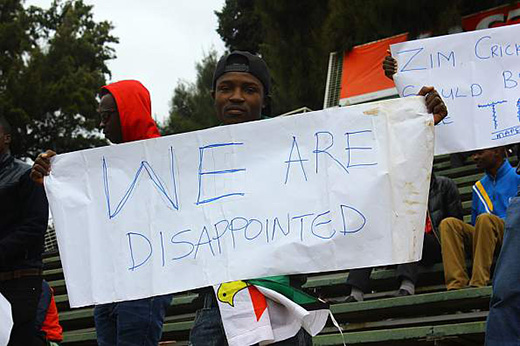 EVEN in the ongoing sorry state of on-field affairs, Zimbabwe cricketers always had their ‘Castle Corner’ to look up to.
‘Castle Corner’ at the quaint Harare Sports Club is a section in the stands that houses a small but immensely vociferous and passionate set of fans who came together and formed the Zimbabwe Cricket Supporters Union more than a decade ago.
A regular day in the office for this lot involved a lot of song, dance and strong support for their national team, something that has been on for over a decade now.
By Monday (June 13) afternoon, however, when Zimbabwe had handed the series to India on a platter, Castle Corner was empty. Rather, vacated in protest.
The Union, led by its chairman, occupied the seats on the left of their den, holding up banners and shouting emotional chants in Shona to convey their utter displeasure at the turn of events.
Given that they were the only section of fans in the crowd on a working day, it was nearly impossible for the players on the outfield to ignore what they had to say and display.
At one point during India’s innings, when Zimbabwe were well and truly out of the contest, the chants grew loud enough for Karun Nair, the batsman at that point, to turn around and take notice.
Being recognised by the board didn’t dilute the strong opinions of the members of the Union.

“They’re not as good as they’re supposed to be, but still we support them. We are not worried about defeats, we just want them to be competitive,” Louie, the chairman of the Union, had proudly stated during the first ODI.
Last straw
Monday’s abysmal show was the last straw.
To put things in perspective, Zimbabwe, as a country and as a cricket team, are perhaps going through their leanest patch.
The struggling economy has had a clear impact on the well-being of the country’s sport for a long time and they clearly seem to be neck-deep in quicksand.
Yet, when Sikandar Raza and Vusi Sibanda came together for a 67-run stand to take the fight to the opposition, there was a renewed sense of hope. The slight show of effort in a particular fixture would’ve rekindled hopes for a massive revival. As it turned out for, ‘it’s the hope that kills you’.Advertisement

Of all the things that fans put into supporting a team or a nation, it’s the emotional investment and hence the constant gratification for it that takes utmost precedence.
A complete annihilation by a far-superior opponent is still not the most bitter pill to swallow. On occasions when they’re taken on an emotional roller-coaster and left to rue ‘what could’ve been’ is when the outburst gets triggered.
When Raza tried to break the shackles in the 27th over, he ended up breaking the resolve of the 30-odd in the stands.
“I could be making a living, but I am here supporting this s***,” said one fan. “Thank god, I am unemployed,” said another.
Disbelief, anger and dark sarcasm
The grey clouds that hovered over Harare Sports Club in the morning had cleared out before the start of play, but the gloom stayed on and made its presence felt.

A disappointed Sikandar Raza walks back