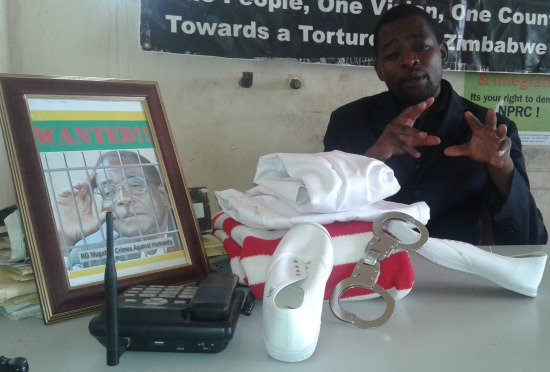 KWEKWE human rights defender Nkosilathi Emmanuel Moyo has released a debut single ‘Nyaraiwo Vanhu’ in which he implores Reserve Bank of Zimbabwe governor, John Mangudya to respect the people and not pretend that bond notes are money.
The three minute reggae beat song, also available on YouTube, makes reference to the cash crisis that has gripped the nation with people spending a lot of time in bank queues, a challenge Moyo said has not been addressed by the introduction of bond notes.
Moyo opens the song with the lyrics, ‘Kuprinter bond zvinoratidza kepererwa nepfungwa, Kuorera mapepa mu street moti yava mari, VaMangudya nyaraiwo vanhu, toti apa economist matadza, hanzi bond note imari, bepa zvaro rango purindiwa mu street’ (printing bond note shows lack of foresight, sweeping papers in the street then you say it’s money, Mr Mangudya respect people, we can safely say as an economist you have failed, to say bond note is money, a paper that has been printed in the streets).
In the song, Moyo goes to scorn at the idea that the bond note has the same value as the US dollar.
“I once spent the whole day standing in a bank queue in Kwekwe only to be given $50 dollars and this song started ringing in my mind,” Moyo told Newzimbabwe.com.
“The following day I went to the studio and recorded the song. I was not expecting it to go this viral since I have never sang before, I am just a political writer and I didn’t know about this musical talent hidden in me.”
Early last year Moyo, also director of the Zimbabwe Organisation for Youth in Politics, made headlines after he shot a video sending a birthday present to President Robert Mugabe in the form of a prison uniform ahead of the 21st February Movement celebrations that were held in Masvingo.
The present also comprised of Mugabe’s portrait inscribed ‘Wanted-RG Mugabe for Crimes Against Humanity’. Moyo also said Mugabe should be taken to The Hague to answer to crimes against humanity.
The human rights activist later fled the country alleging that state security agents were sending him death threat messages, making frequent visits to his home and following him only to return at the end of last year.
Advertisement