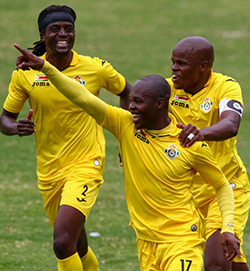 NAIROBI: Organizers of the 2017 Council of East and Central Africa Football Association (Cecafa) Senior Challenge Cup on Thursday criticized Zimbabwe for pulling out of the tournament.
Zimbabwe withdrew from the regional tournament over security concerns on Wednesday, claiming the situation in Kenya was ‘worse’ than Kenya.
“They would have said they don’t have tickets so that we pay for them and not using security as an excuse. They are more insecure than us and we know it,” Cecafa Secretary General Nicholas Musonye said.
“Kenya have no problem with security. Even the Premier League matches have been staged in Kisumu with no injuries reported. In fact, they asked to feature, we didn’ t invite them,” the seasoned administrator charged.
Tournament organisers excluded the lakeside city of Kisumu, the bedrock of opposition National Super Alliance (NASA), as one of the hosts for the now nine-team tournament that will kick off on Sunday in Kakamega and Machakos counties.
Kisumu has been rocked by a series of fierce riots since incumbent President, Uhuru Kenyatta, was declared the winner of the first disputed polls of Aug. 8 and the Oct. 26 rerun.
Following the withdrawal of Zimbabwe, Group B of the 2017 Challenge Cup will feature four teams – record winners Uganda, Burundi, Southern Sudan and Ethiopia.
Kenya are in Group A and will open their campaign to reclaim the title they last won in 2013 with a testing fixture against former champions Rwanda at the Bukhungu Stadium, Kakamega that will follow the opening ceremony.
Libya is the other invited nation for the 2017 Challenge Cup and are pooled in the same group as the hosts, Rwanda, Tanzania and Zanzibar.
Football Kenya Federation President, Nick Mwendwa, challenged new Belgian head coach, Paul Put, to win the title as a stepping stone to a successful 2019 AFCON qualifying campaign.
“We are eyeing to win it. It was a target even before the new coach came in because the last time we hosted we won it. It’s good if they deliver it this time round too.
“I know the new coach has focused on the 2019 AFCON but this is a good way of setting the tone,” Mwendwa urged.
“You can see the will, energy and urge in them. They are a focused group who want to achieve something. It has given me a chance to see the local players and I’m sorry to those who got injured and we couldn’ t field them for the tournament,” Mwendwa said.Advertisement

“They are fitting into my system. We begin with Rwanda, a tough side with most of their players going to participate in CHAN (Africa Nations Championship),” Put, the former Burkina Faso coach, added.
Put subsequently named his 23 man squad to represent Kenya in the Challenge Cup ahead of their opener at Bukhungu starting at 2 p.m. local time that will be preceded by the opening ceremony.