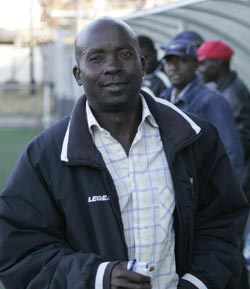 WHILE Zimbabwean football is celebrating its first Africa Cup of Nations qualification in 10 years, one man who claims to have helped guarantee that success by thwarting a match-fixing plot is not among those partying.
Maxwell Takaendesa Jongwe in fact says he is being persecuted for performing a “heroic act” for the love of his country.
The former Zimbabwe Football Association (Zifa) technical director has spoken of his great personal anguish, insisting he was the person who initially exposed attempts to fix the Warriors’ opening double-header qualifier against Swaziland in March – only to be sacked for what he now believes was a dirty tactic against him to divert attention from the real perpetrators of the foiled fixing attempt.
He says that his dismissal by Zifa on charges of going “to a third part” to report the fixing plan was a secret tactic to suppress the stink surrounding what really happened in the initial stages of the plot, which he’s worried the world might never know of.
Jongwe says he reported the fixing conspiracy to “state security agents” after coach Calisto Pasuwa showed him damning WhatsApp exchanges which had been forwarded to him by whistleblower Leeroy Waguta, plotting to fix the two qualifiers.
The WhatsApp messages, Jongwe says, contained detail of how the conspirators planned to influence results on behalf of an Asian betting syndicate.
Jongwe goes on to say he reported the case to “higher offices” because he was suspicious of the role of a top Zifa official (name given).
During a trip South Africa, the official in question is said to have called coach Kalisto Pasuwa during his contract dispute with the association early this year, using the mobile phone number of one of the main characters in the fixing plot.
“Kalisto came to me as the technical director and someone he trusted with messages leaked to him by Leeroy. He said to me, ‘TD (technical director), I’m doomed, I can’t win. These games are going to be fixed’,” said Jongwe.
“I couldn’t go to my bosses because the coach told me that one of the people involved in the WhatsApp exchanges had given his mobile phone to a top Zifa official to call him from South Africa when he was fighting with Zifa over his contract.
“So where else was I supposed to go when I wasn’t even sure of the role of the people I should report the matter to? I am not accusing anyone, but at that time I was very suspicious and I thought it was a matter of state security. Some $320,000 budget to sell the nation for 30 pieces of silver!Advertisement

“I performed the role of a patriot. I would have simply said gone to those guys and said ‘I have this information; I know what you are doing’. And I would have also got a share of the dirty money. Matches would have been fixed. And we wouldn’t have qualified.”