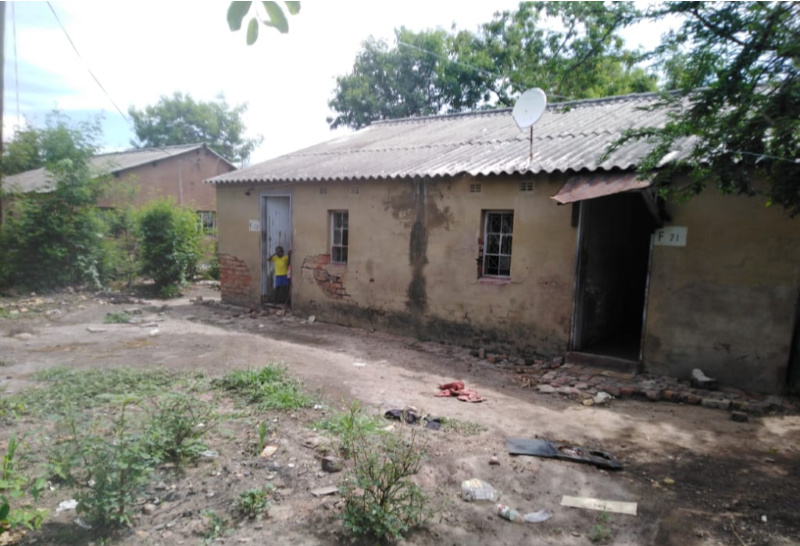 One of the affected homes
Spread This News

More than 50 families that were affected by flash floods in Hwange are still housed at the Colliery Company guest lodge where they share rooms, 18 days after the harsh weather phenomenon hit the area.

Hwange received a total 139mm of rain within three hours on 18 January resulting in flash floods that left more than 100 people affected in Lwendulu and Cinderella suburbs.

The Hwange Colliery Company and Hwange Civil Protection Unit responded by evacuating the families to the guest house in Lwendulu and are surviving on handouts from well-wishers.

The affected homes were built during the colonial era as bachelors’ accommodation for colliery company workers.

Each unit has eight rooms and occupied by four families using two rooms each and were built on a low-lying area making them prone to flooding.

The houses have been affected by floods for many years and this is the second time occupants have been evacuated after another incident in 2016.

The low lying vlei like area stretches from the central business district and cuts across connecting to Deka River.

TM supermarket is still closed after its internal system crushed as a result of the rains that also flooded the shop.

Rugare Dobhie, spokesperson for the colliery company, said the drains which were blamed for the floods will be rehabilitated.

A visit to the affected area a few days ago showed that no work has been done yet.

The affected houses are still unoccupied with some still damp on the floor and walls.

Anguished victims who spoke to NewZimbabwe.com said they were not sure about their future.

“We don’t even know what fate has for us. We were told that we will go back once it’s safe to do so but they later changed and said they are trying to get us alternative houses. Our worry is that these floods have been happening every time and no action being taken and this might happen again this time,” said Ronia Mwinde.

Some of the victims are pregnant women while some have newly born babies.

School children were also affected as they lost all their stationery and are now struggling to do their homework as they live in shared rooms.

Families however cook separately after donations are shared among them.

Some organisations have been taking turns to donate foodstuffs and other goods through the local councillor and CPU.

Hwange District Development Coordinator Simon Muleya said they were waiting for direction from the colliery company which administers the area.

“Colliery management said it is trying to secure alternative houses for the victims and will hear from them once they are ready,” he said.