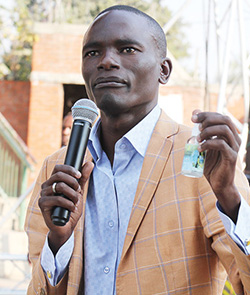 BUSINESS at the on-going 18th International Conference on AIDS and STIs in Africa (ICASA) came to a standstill after a pastor who recently made headlines for reportedly dishing anointed condoms visited the Condomize exhibition stand to explain the incident.
Pastor Paul Sanyangore stirred a passionate debate after he reiterated that condom messages should be preached in church “because people were dying of AIDS”.
Sanyangore however, made it clear that he did not dish out anointed condoms but only prayed for a single lady who had brought her condoms to church as she believed his prayers would assist in her situation.
“I didn’t bring condoms to church,” he said.
“But I was faced with this difficult scenario. It was during a church service and at prayer time this other lady brought her condoms for me to pray for them.
“She has been separated from her husband for two years and she wanted me to pray for them so that it would not be a problem to convince her husband that they had to protect themselves as they had been separated for too long.”
However, the debate became an emotional with some among the gathered crowd accusing him of promoting promiscuity while others praised him.
There was also disapproval from panellists from the Medicines Control Authority of Zimbabwe, government and condom marketing circles who said his actions were misleading.
However, Sanyangore defended himself saying the church was the best place to preach the “safe sex gospel”.
“I am only 30 and, at my age, I have buried more than ten people who succumbed to AIDS-related illnesses.
“I’m so much privileged to preach that gospel because I meet over 5,000 people during my church services so there is no better opportunity than that. It is congregant who are dying so why not preach about condoms, HIV and safe sex in church.”
He added, “I however, encourage people who are not married to abstain from sex, not to use condoms.
“Condoms address the physical side but HIV is spiritual if you deny that it’s the same as silencing us to say the things that affect us most.
“I address the spiritual side because that’s where my expertise is. If we keep quiet as pastors more people will die.”
Sanyangore reportedly prayed for condoms during a recent service at his church.Advertisement

It was reported women stampeded to have a box of the ‘anointed’ condoms for use in their homes in a development that sparked controversy.
Sanyangore however, insisted that he did not bring condoms to church but that a congregant brought them asking if it was proper for her to use them.