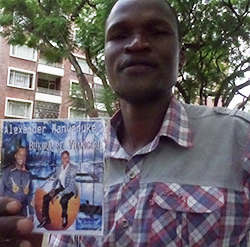 GOSPEL music legend Mechanic Manyeruke, 72, will one day exit the music business happy to have finally found a suitable heir to his brand, thanks to his sixth born child Alexander who has also entered the gospel music scene.
The elder Manyeruke had been kicking himself for what could have been a false start to realising the ambition after his last among his seven children Emmanuel a.k.a Guspy Warrior (25) dared to be different, becoming a popular ZimDancehall chanter.
The dancehall world is fraught with immoralities, say critics, and is a far cry from that of gospel, which is seemingly patronised by God fearing individuals.
And perhaps hearing his father’s laments, Alexander, 33, has invaded the music arena with a debut six track gospel CD which sounds exactly like the elder Manyeruke’s.
Likewise, Alexander has entitled his production Bukira Re Vhangeri, meaning gospel music offshoot.
His songs have started receiving airplay on the country’s radio stations.
No pressure
Alexander, a Harare taxi driver who also runs a small poultry project, feels he was not under any pressure from his father to sing gospel music and take his legacy forward.
“It is something my father has always suggested but we all took it casually but with time, I thought the only way we could appreciate what our father was doing was to do it.
“But our father is not pushy,” he said.
At 33, the father of two does not regret what looks like a delay in giving his musical talent some expression.
“It was all about wanting understand the industry. I thought I could do it better when I was more mature. I have always tried to be a bit more careful with the industry,” he says.
After choosing gospel music unlike his younger sibling, Alexander does not think the Seunononga chanter was way wide.
Supportive of brother
“I don’t think he is way wide. I have given myself time to understand him,” he said.
“All I can say is that it is music after all. It is a decision that one makes personally.
“Maybe he thought that was where his strength is and maybe he felt if he tried gospel, he may not have been successful.”
Alexander and Guspy Warrior are the two Manyeruke offspring who are musicians.
Although he grew up with a musician father, Alexander feels the final push to take music seriously was from a friend who introduced him to additional musical instruments few years ago.Advertisement

Mechanic Manyeruke said he was proud of his son.
“To me, Alexander definitely tried his best. He came to me some-time back to borrow a guitar and little did I know he intended to do something so wonderful,” he said.
“I would safely retire one day knowing there is a child who will carry on with my legacy.”
Alexander says he is still trying to gauge how the market responds to his first project and is yet to decide if he can make it a full time profession.