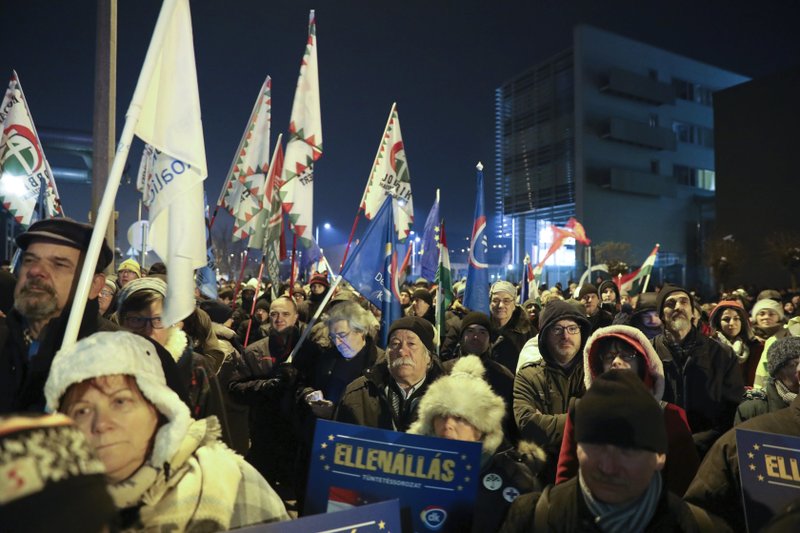 Hungary: A few thousand demonstrators gathered in freezing temperatures outside Hungary’s state broadcaster Monday night in a fifth day of protests against the right-wing government of Prime Minister Viktor Orban.

Lawmakers from all opposition parties took to a temporary podium to declare they would continue protests until they are allowed to read out their demands on state television.

The protests were sparked by a new labor law that in essence enables the return of a six-day work week, if an employee agrees, with overtime payments potentially unpaid for up to three years.

But the demands of protesters have expanded to include cleaning up state corruption, creating an independent judiciary and ensuring neutral state media.

“We will continue with protests all the while our demands are not read out over state media. We are not going anywhere,” Timea Szabo, a Parliament member for the small, centrist Dialogue party, told the crowd.

“The law has not been trampled on in such a way here for 30 years,” she said, apparently referring to the roughing up of some legislators by security guards at the MTVA building early Monday.

Demonstrators repeatedly chanted slogans like “We won’t leave” and “They are lying day and night!”

Legislators charged that police took orders from private security guards in forcing them out of the MTVA building, rather than protect their right to enter a public building.

Agnes Vadai of the Democratic Coalition, a center-left party, told The Associated Press that she had been manhandled by security guards,

“This is nonsense,” she said of the lack of help from police officers. “It’s their obligation to protect all Hungarian citizens, regardless of their position.”

The group of 10 lawmakers had entered the building insisting on the right to read their five demands live on air, including the revocation of the labor law.

The government has defended the law, saying it will ease the shortage of workers, most especially in the booming auto and manufacturing sectors, and enable employees to earn more money as they wish.

Orban’s allies have denounced the protests as the work of liberal groups financed by Hungarian-American financier George Soros. The Open Society Foundations, an organization founded by Soros, again denied that Monday.

“The Hungarian people are protesting against their government because they have legitimate grievances. Nobody believes Viktor Orban’s false assertion that George Soros is behind these protests,” the group said in a statement.