ANTI-RIOT police in Bulawayo Monday blocked dozens of survivors of the 1980s Matebeleland and Midlands Gukurahundi massacres from presenting their court petition calling on authorities to open an inquest into the army slaughter of an estimated 20 000 civilians.

The victims, who had planned to march from the City Hall to the High Court, failed to do so after anti-riot and plainclothes police details besieged the venue.

“We applied for permission to hold this march but police declined claiming that we had given them short notice,” said Thomas.

“All we wanted was to take our petition to the High Court so that the judiciary can set up an inquest into the Matebeleland genocide.

“There was no point for (President) Mnangagwa to set a commission of inquiry into the death of seven people in Harare while victims of Gukurahundi like myself are still nursing wounds of the atrocities.” 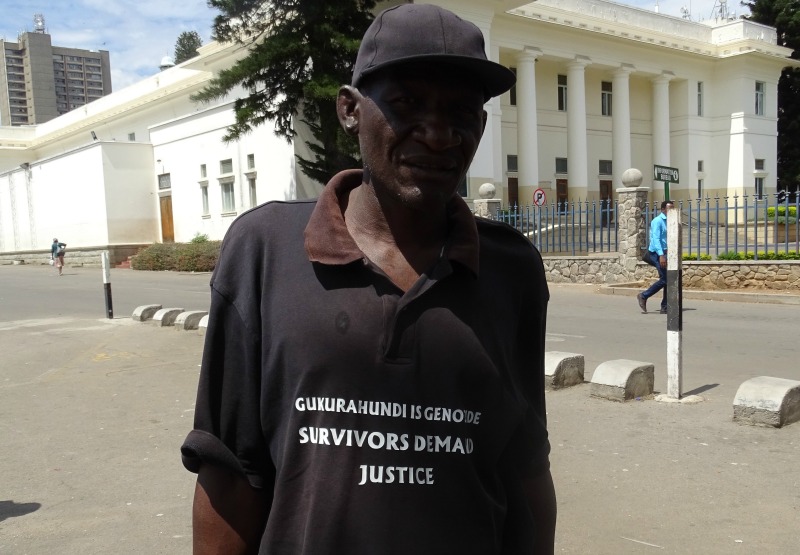 Charles Thomas outside the City Hall

Thomas is also a survivor of the Balagwe Gukurahundi torture camp which was set up by the then Robert Mugabe led government forces in the mid-1980s to kill and torture civilians suspected to be followers of late former state Vice President and one time Mugabe bitter enemy, Joshua Nkomo.

Nkomo was accused of supporting armed dissidents who ditched the country’s army to commit acts of terror in Matebeleland and Midlands while the military operation was waged in the ostensible attempt to hunt down the militants.

According to the petition, the Gukurahundi victims who were at the time targeted for allegedly harbouring the dissidents, are now also demanding compensation from the government.

“We submit this petition for inquest into the Gukurahundi genocide as survivors of this genocide.

“We demand justice for families of survivors, victims. From 1983-1987, Zimbabwe committed second genocide and there has been no redress for us.

“We also request compensation for us before we take this to the international bodies,” reads part of the petition seen by NewZimbabwe.com.

The petition was addressed to the Bulawayo High Court‘s senior Judge.

Thomas was arrested alongside Siwela in 2011 for allegedly distributing fliers calling on Zimbabweans to revolt against the Mugabe government.

New President Emmerson Mnangagwa has refused to both own up and apologise for atrocities waged when he was at the helm of the country’s security ministry.