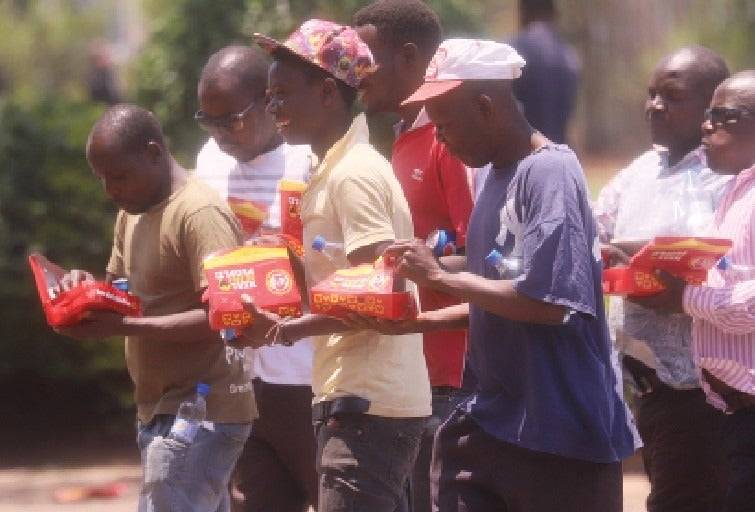 WHEN President Emmerson Mnangagwa arrived for the anti-sanctions day event on Friday, the terraces were near empty as thousands of hungry Zimbabweans stampeded for free food outside.

Tired protesters had marched for 3km from an open space on the western peripheries of the Harare CBD to the country’s main stadium further west.

When they got to there, it was time to scramble for chicken, chips and drinks that was being doled out free of charge outside.

With temperatures in Harare soaring above 30 degrees celsius, coupled with a general hunger period, the food could not have come at a better time.

The event was turned into a feast.

One elderly woman who was caught on camera in a video that went viral on social media could not hide her gratitude. She admitted the food was a blessing to her.

Another woman who spoke to NewZimbabwe.com said she wished such events could come more often so she could get food for herself and children.

However, it was not all joy for everyone in the stadium, as one unidentified woman who was not equal to the pushing and shoving fainted.

She was seen being assisted by paramedics from the Red Cross Society and was later ferried to hospital by an ambulance.

The day was set aside by regional body, SADC for a unified call to lift “illegal” sanctions imposed on some top government officials, security commanders, journalists and individuals with links to government who were all accused of aiding the stifling of democracy in the country.

The measures were imposed 2001 and 2003 by the US and the European Union at the height of Zanu PF invasions on white owned land and government crackdown on the opposition.