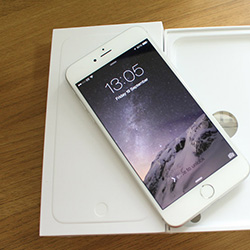 APPLE has responded to claims that its new handsets are prone to bending by saying such damage would be “rare” during normal use.
Media outlets across the globe had reported that several iPhone 6 owners had complained of handsets becoming misshapen after being carried in trousers pockets without a case.
Several of the US firm’s rivals have also helped publicise the claims.
Apple said nine customers had told it their iPhone 6 Plus phones had bent.
In a statement the company noted that the handsets’ shells had been constructed out of “anodised aluminium, which is tempered for extra strength” and also featured stainless steel and titanium parts to reinforce the areas of the phones likely to experience the most stress.

“We chose these high-quality materials and construction very carefully for their strength and durability,” it added.
“We also perform rigorous tests throughout the entire development cycle.
“iPhone 6 and iPhone 6 Plus meet or exceed all of our high quality standards to endure everyday, real life use.
“With normal use a bend in iPhone is extremely rare and through our first six days of sale, a total of nine customers have contacted Apple with a bent iPhone 6 Plus. As with any Apple product, if you have questions please contact Apple.”
Stock drop
Apple’s share price has fallen following the publicity generated by users posting photos of bent iPhones to the internet.
News that it had also pulled an iOS 8 operating system update after iPhone 6 users complained it made their phones unable to make or receive calls had also caused concern.
Apple’s competitors have taken advantage of its troubles.
The official Twitter accounts of LG, HTC and Samsung have all posted messages alluding to the controversy, with LG going so far as to use the hashtag “bendgate”, which other members of the public had used to refer to the claims.

Apple had previously announced that it had sold more than 10 million units of the iPhone 6 and its larger sibling the iPhone 6 Plus.Advertisement

“While our team managed the manufacturing ramp better than ever before, we could have sold many more iPhones with greater supply and we are working hard to fill orders as quickly as possible,” its chief executive Tim Cook said in a press release on Monday.
It highlighted the “all-new dramatically thin” design of the handsets – a factor some users had speculated might be the cause of them bending.
However, it has also been pointed out that handsets by Sony, Samsung, Blackberry and others have also bent in the past, and several analysts have cautioned that it was too early to say if the incidents involving the new iPhones were more widespread.