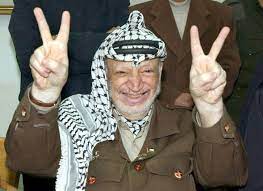 HIS signature red-black-white or black white keffiyeh distinguished him.

He judiciously wore it in a way that only revealed his left ear which some said resembled the map of Palestine.

It was his style. He called it the ‘Arafat style.’

The history of the state of Palestine is incomplete without mentioning the name Yasser Arafat.

Intellectually, he was nowhere near a genius, but Arafat was a pragmatist and activist to the core.

His was a life of struggle, dedicated to restoring the lawful rights of the Palestinian people.

He was an avid believer of the material, political and moral deliverance of the Palestinian people from the devastation of the 1948 Nakba; a cataclysm that saw over 700 000 Palestinians being displaced from their places of residence in what came to be known as Israel.

He did not strike many as possessing the features and inherent qualities of a leader because he was physically unprepossessing, even diminutive as compared to people like former Egyptian leader Gamal Abdel Nasser.

Some recompense for such frailties by possessing top-notch oratorical skills as did ex-German leader Adolf Hitler but this was not the case with Arafat.

Yet he has been immortalised not only in Palestine and the Middle East but across the globe as one dedicated to the cause of freedom for the Palestinian people.

The movement he led faced a myriad of obstacles including threats on his life (he escaped over 13 assassination attempts) but he felt obligated to deliver Palestine from the effects of the 1948 political concussion; lay the foundations for a peaceful resolution to the ostensibly unending tensions with Israel and relocate the Palestinian national movement back on its own soil.

Arafat died under highly suspicious circumstances on November 11 2004 at the age of 75 in Clamart, a commune in the southwestern suburbs of Paris, France.

The exact cause of his death has never been decisively determined.

Questions have been posed regarding the successful attainment of Palestinian political objectives in the post-Arafat era.

Did the death of the political kingpin signal the beginning of the end of the revolution?

While the seeds of the revolution planted by Arafat bore fruit over the years, with the former’s successor Mahmoud Abbas trying his best, Israel has been ruthlessly quashing the revolution, further complicating the conflict.

In December 2008, Israel launched a 3-week long military offensive in Gaza after Palestinians fired rockets at the southern Israeli town of Sderot.

About 1 400 Palestinians and 13 Israelis were reportedly killed before a ceasefire was agreed upon.

In July and August 2014, Israel supposedly killed 2 100 Palestinians in Gaza and a March 2018 blockade of the enclave resulted in Palestinians protesting at Gaza’s border with Israel.

To quell the situation, Israeli troops opened fire on the protesters killing over 170 Palestinians in several months of protests, which also prompted fighting between Hamas and Israeli forces.

According to UN figures, Israel’s relentless attacks on Palestinian communities in May this year displaced more than 75 000 Palestinians, around 40 percent of them children, and destroyed thousands of homes, government offices, schools, and the only health centre providing Covid-19 testing and vaccines in Gaza.

Despite the determination instilled into the Palestinians by Arafat, the state needs the active involvement of the international community to help their quest for self-determination.

In international relations, no state is an island.

States need each other for the attainment of both domestic and foreign policy objectives because which is why the Palestinian leadership has forged relationships with over 136 countries who have reaffirmed their steadfast support for and solidarity with the government and Palestinian people in their quest for self-determination, sovereignty, and an independent state.

Zimbabwe is one of those states.

Harare’s foreign policy is rooted in its belief in: “Self-determination and support for liberation movements; adherence to the principle of national sovereignty; respect for the territorial integrity of all countries; promotion of the principle of equality among nations; belief in non-discrimination, whether based on colour, creed, religion or other forms; and the promotion of peaceful settlement of disputes.”

This is the grounds upon which the unwavering support for Palestine is etched.

Harare has been unequivocal in its condemnation and rejection of all measures aimed at altering the demographic composition, character, and status of the Palestinian territory.

To help Palestine, Zimbabwe has been calling for the full implementation of all relevant United Nations resolutions including 181, 242, 338, and 2334 to bring about a two-state solution based on the pre-1967 borders.

This is because the country believes that the two-state solution is the only way to achieve a just, lasting, and comprehensive peace between the Israelis and the Palestinians.

In his 2018 solidarity message on the occasion of the International Day of Solidarity with the Palestinian people, President Emerson Mnangagwa noted that: “It is now time to end the conflict by establishing an independent Palestinian State, with East Jerusalem as its capital, which will co-exist with the State of Israel in peace.”

This is in line with Article 2 of the UN Charter which speaks to the need for states to engage in peaceful resolution to conflict.

Solidarity messages only are important but not sufficient in helping Palestine.

States supporting the cause of the Palestinian people should not perfect the art of rhetoric but ensure that they act in ways that prove they respect international peace and security which is continuously preached on international podiums.

Till when shall Israel’s unabated airstrikes on Gaza be allowed to continue? Sovereignty is golden in international relations but when the lives of innocent women and children are killed now and then is it not reason enough for action to be taken against Israel.

Zimbabwe was sanctioned for human rights abuses nearly two decades ago, why has Israel suffered the same fate for its bombings and killings in Gaza?

When international organisations mandated with regulating interstate conflict selectively apply international law, can the objectives of attaining peace and security be attained?

Trapped between the proverbial hard surface and a rock, from whence shall Palestinian help come from?