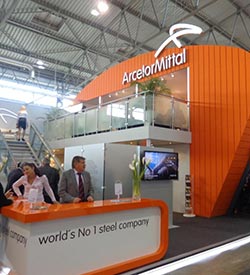 ARCELOR Mittal, the world’s biggest steelmaker, is considering an offer for Zimbabwe Alloys Chrome Ltd (ZimAlloys) an insolvent ferrochrome producer seeking investors, according to a person with knowledge of the matter.
ArcelorMittal officials will visit the Zimbabwe-based company in the next two weeks and want to carry out a due diligence on it, said the person, who asked not be identified because the matter is private.
Zimbabwe Alloys’ chrome ore reserves make it of strategic interest to ArcelorMittal, the person said. Ferrochrome, made by processing chrome ore in a smelter, is used in the production of stainless steel.
A spokeswoman for Luxembourg-based ArcelorMittal declined to comment.
ZimAlloys, 85 percent owned by Benscore Investments, controls almost 40 percent of the country’s chrome reserves, the biggest in the world after neighbouring South Africa.
Three local bidders for ZimAlloys failed to raise the cash to meet the requirements of audit and advisory firm Grant Thornton Camelsa, which was appointed to manage the company after it was declared insolvent in July 2012, the person said.
ZimAlloys’ finances were hurt by a government ban on exporting unprocessed chrome ore and falling prices of ferrochrome.
The company has been struggling to raise $40 million to rebuild three chrome smelting furnaces in Gweru which were shut down in 2008 due to rising maintenance costs and a lack of capital.
South Africa’s Metmar Ltd. owns 13.1 percent of ZimAlloys, which was controlled by Anglo American Plc until 2005.
Zimbabwe is facing “huge” external demand for chrome ore, renewing pressure on the government to relax a law that bans exports of the unprocessed material, Mines Minister Walter Chidakwa said in March.
Government imposed an embargo on exports of chrome ore in April 2011 to try force companies to process the metal locally.Advertisement