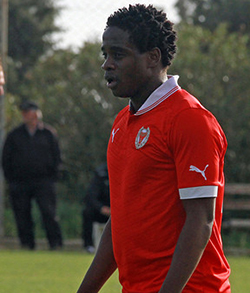 FORMER Warriors midfielder Archford Gutu has left Caps United to rejoin Swedish second tier side IFK Varnamo.
Gutu has sealed a two-year deal with the club, having previously spent one and half seasons at Varnamo on loan, from top flight league side Kalmar FF.
After spending this season as a bit-part player at Caps United, has opted to return to Sweden where he hopes to revive his career.
“Twenty-three-year-old Archford Gutu, was one of IFK Värnamo absolute best players in 2015. Prior to this season, he was also one of the players the club worked hard to maintain, however, he chose to play in Zimbabwe in 2016,” announced the club on their official website.
“It is with this background very gratifying, to be able to welcome Archford back to the club. A player of such capacity choosing to once again, become an important part of this club is a clear sign that IFK Värnamo is an interesting environment to be in.
“In Archford Gutu IFK Varnamo, has got a very skilled midfield player who has great qualities, in the offensive play and also working very hard on the defensive. He really is a player to build the team around.”
Before joining Caps United at the beginning of this year, Gutu almost rejoined Dynamos whom he won the 2011 league title with before winning a contract with Kalmar FF.
At Caps this season, he once vented his lack of game-time frustrations by savaging coach Lloyd Chitembwe on social media.Advertisement