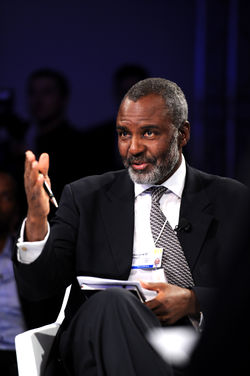 NEWS that Dr Nkosana Moyo is thinking of running for president has been received with some form of paradoxical excitement. Not a single person has managed to say he is not a good candidate; not even George Charamba or Prof Jonathan Moyo who you would expect to denigrate anything good coming to Zimbabwe. There is near universal acceptance that he embodies the kind of values that we need in a leader.
Rather, what we have heard are statements to the effect that not ‘now, but in 2013.’ The logic being that for 2018, we just need one candidate to get rid of President Robert Mugabe. And for that to happen, we need everyone to stand behind one ‘grand coalition’ candidate. Anyone of the current opposition leaders will do; even the former Zanu PF VP Mai Mujuru – just until we get Mugabe out. Never mind principle, anyone will do. We will do democracy in 2023, the logic goes.
Sadly, this is not the right way of doing things. Replacing Mugabe with a flagpole that has no vision to transform the country will not fix our problems but merely increase them. There is a vast amount of research which shows that it is not democracy that begets economic growth but that the causal relationship goes the other way round. The greater the level of prosperity a country experiences, the freer and more democratic it becomes.
The imperative to achieve economic growth therefore far outweighs the notion that any change will do. As long as the country remains poor any person without a vision who takes over from Mugabe has every opportunity of continuing to exploit the economically vulnerable, particularly the rural poor.
What the country needs right now is to choose the best possible people as far as turning the economy around is concerned. The people that turn the economy around and grow it are ultimately the ones that will beget lasting freedom and democracy.
The 2012 census placed Zimbabwe’s population at 13 million although the exact figures are currently very difficult to verify given the level of migration out of the country. So, if our we have many citizens, what really is wrong with the country going through a rigorous process of choosing its absolute best talent to lead it? Why must the country take a chance on another probable failure without ensuring that whoever takes over is the absolute best there is? Are we so desperate that we would eschew talent and ability for “anyone will do”?Advertisement

Our argument can, in fact, be backed up by the numbers. In virtually every election that the country has ever held to date, the average voter turnout rarely touches the 45% mark. So roughly under half of all eligible voters ever bother to vote, including the so-called watershed elections in 2008 where turnout was at 42.8%; that means about 2.5 million people voted out of a possible 6 million voters in that election. If you add onto that the numbers registrar general Tobaiwa Mudede manufactured through rigging, you can see just how easy it is to manipulate the process when such small numbers turn out to vote.
A good number of the people that do not turn out, especially in urban areas, are people that are not inspired by the candidates on offer. The US elections involving one Barack Obama broke all records about youth turnout, but the numbers dwindled when Donald Trump and Mrs Hillary Clinton fought their dour fight which shows one thing: people do not bother voting when the result is unlikely to bring change to their lives.
Kenya goes into an election in August this year and an estimated 19 million people will cast their ballots. And there will be no less than nine presidential candidates. France recently elected a minister who resigned from the ruling government and who launched his movement barely months before the elections. No one told Emmanuel Macron that he would split the votes; or that he was affecting democracy.
On the other hand, Zimbabwe almost always fails to mobilise just three million voters in a country of 13 million people, nearly half of whom are eligible to vote. Further, who exactly are these voters? Well, it turns out its mainly people in the 18-35 years’ age group who ironically make up 65% of the population. Zimbabwe has a very young population who are either uninterested or somehow disengaged from the politics of their country and yet make up the bulk of the 90% who are unemployed and primarily engaged in ‘kuKiyakiya’, or engaging in “maZhet” as they say.
So, neither the ruling party nor the current opposition have managed to excite and mobilise these people to set aside just one or two days of their lives to register and go and vote and see a new beginning for their country, and some people argue that no new candidate should contest, lest they divide the vote? How exactly do you divide a vote that does not exist?
Indeed, what divide is greater than the ones that already exists in our country where people either vote along ethnic lines or geographic location, e.g. the so-called urban vs rural split? How is it possible that the aspirations of the people in the rural areas and those in the urban areas could be so diametrically different in a small country of 13 million? How is it that during the liberation struggle the urban and rural populace worked in concert towards the attainment of a single goal and yet can’t do the same today?
How is it possible that intimidation and manipulation can now cower rural Zimbabweans to the point of not wanting to emancipate themselves from poverty? These are the exact same things the brutal and murderous Smith regime did if not worse. It is not debatable who was worse, him or Mugabe the tyrant; people were kept in keeps, beaten, tortured, maimed yet stood resolute against the white minority regime.
Our argument is therefore that the few votes that we can already account for election-after-election are already split and no one can split them any further. If anything, what the country needs today is a candidate with a vision around which we can all come together, and do that to such an extent that no amount of intimidation or manipulation can prosper. The country needs inspiration, particularly the young to whom the future ultimately belongs. No one has a greater vested interest than they do in the outcome of an election today and so a new candidate who can inspire them must absolutely be welcomed by all.
And when such a candidate is identified, suggesting that he should wait while we unite behind a dour, failing opposition establishment that has been trying since 1999 to remove the tyrant without success is akin to doing the same thing over and over again but expecting a different result. Google has a definition for that, which needs not be said.
Like someone said recently on the debate around Nkosana Moyo, is time, for better leadership, for inspirational leadership, for visionary leadership, and for the people of Zimbabwe to govern.
Mgijima Mnondo (MBL, Bsc Met Engineering) is an independent management consultant in various countries on the African continent.
Mrs Audrey Mushonga (PhD Sociology) works working in the NGO sector in Harare)