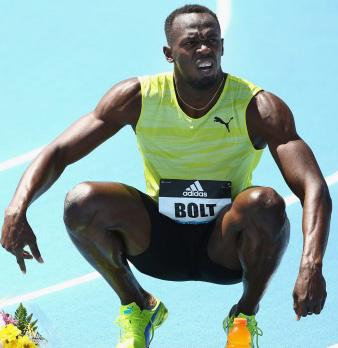 USAIN Bolt looked in miserable form despite winning the 200m at the New York Diamond League meeting.
The superstar athlete was pushed all the way, looking pained and awkward as he did so, and barely won the race in a sluggish 20.29 seconds on a warm, windy day at Randall’s Island – the time over a second slower than his world record of 19.19 at the distance.
Bolt was running into a stiff headwind of 2.8 metres per second that affected his time to a degree – but the slender margin of victory against a relatively weak field was more telling than the time on the clock, and the six-times Olympic gold medal winner admitted that he was bewildered by his sub-standard turn.
The 28-year-old Jamaican, who also holds the world record in the 100 metres, failed to show his legendary runaway burst of speed and only just held off second-placed Zharnel Hughes of Anguilla, who timed 20.32.
“I’m not happy about my performance today. My turn was horrible, I don’t know what happened,” Bolt said. “My worst turn ever.”
Bolt said the turn affected the rest of his race, run in front of a packed grandstand filled with fans from his homeland.
“After I came off the turn, I knew it wasn’t going to be fast … so I pretty much just wanted to get home. I didn’t really stress it too much.”
He had hoped to break 20 seconds in the race as he aimed to build towards this year’s Beijing world championships in August after a 2014 season limited by injuries.
It’s not the first poor showing for the hero of London 2012 and Beijing 2008: Bolt managed just 20.20 in Kingston and 20.13 in Ostrava earlier this year.
In other featured races in the Diamond League meet, world record holder David Rudisha of Kenya, who pulled up early in his last race, ran easily in winning the 800 metres in 1:43.59, three-hundredths of a second shy of the year’s best.
Cuban triple jumper Pedro Pablo Pichardo, whose 18.08m in Havana was third longest ever, won with 17.56 ahead of American Olympic silver medalist Will Claye with 16.96.
Tyson Gay overcame a slow start to win the men’s 100 metres in 10.12 seconds, straining to overtake Jamaican Nesta Carter, second in 10.15.
Like Bolt, his time was hardly stellar – but taking into account the 1.7m/s headwind it was still a solid performance.Advertisement

“My start wasn’t great and I feel bad because we’ve been working on it,” said former double world champion Gay, striving to find top form after serving a one-year doping suspension.
“I ran like poop in the meet, so I’m still working on it.”