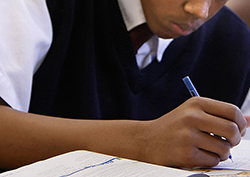 THE Ordinary Level English Language Paper 11 examination to be rewritten on February 16 will be taken under armed guard, the Zimbabwe Schools Examination Council (Zimsec) has said.
In a statement detailing procedures to be taken ahead of the re-sit, the examination body said it had been forced into the drastic action because of the level of cheating in the November 2017 exam.
The re-sit however, faces legal hurdle after parents filed an urgent chamber application at the Harare High Court last week through the Zimbabwe Lawyers for Human Rights (ZLHR).
“Please be advised that candidate performance cannot be reliably premised on the November 2017 English Language Paper 11 answer scripts as the scripts indicated unacceptable breach levels,” Zimsec said in its statement.
“While initial indications had been that breaches were localised investigations through subsequent processes revealed a wider spread of the problem.
“The magnitude and complexity of the malpractice informed the need for appropriate escalation before implementation of this outcome in tandem with exam regulations.”
Primary and Secondary Education Minister Paul Mavhima announced last week that the results of last year’s English Language Paper 11 examination had been nullified due to widespread cheating.
Zimsec said printing of the new paper will be finalised this Monday (February 12) ahead of delivery to centres on the date the examination is to be written, February 16 2018.
The examinations body also seemed to suggest it had solicited help from the country’s security services.
“Zimsec will take custody of a candidate scripts by 14:30hrs on the same day. While security measures have been reviewed and augmented generally, categorised centres will collect and return scripts under armed escort,” the exam body said.
While critics have argued the new arrangement will present problems for candidates from boarding schools, Zimsec said this has been catered for.
“All 26,546 candidates registered at 181 boarding schools are assured that these centres have been engaged to enable single overnight accommodation and associated meals for this limited window.
“The remaining 243,223 candidates at 2010 registered day school examination centres are expected to present themselves at 9:30hrs at the latest in preparation for the 10:00hrs exam.”Advertisement