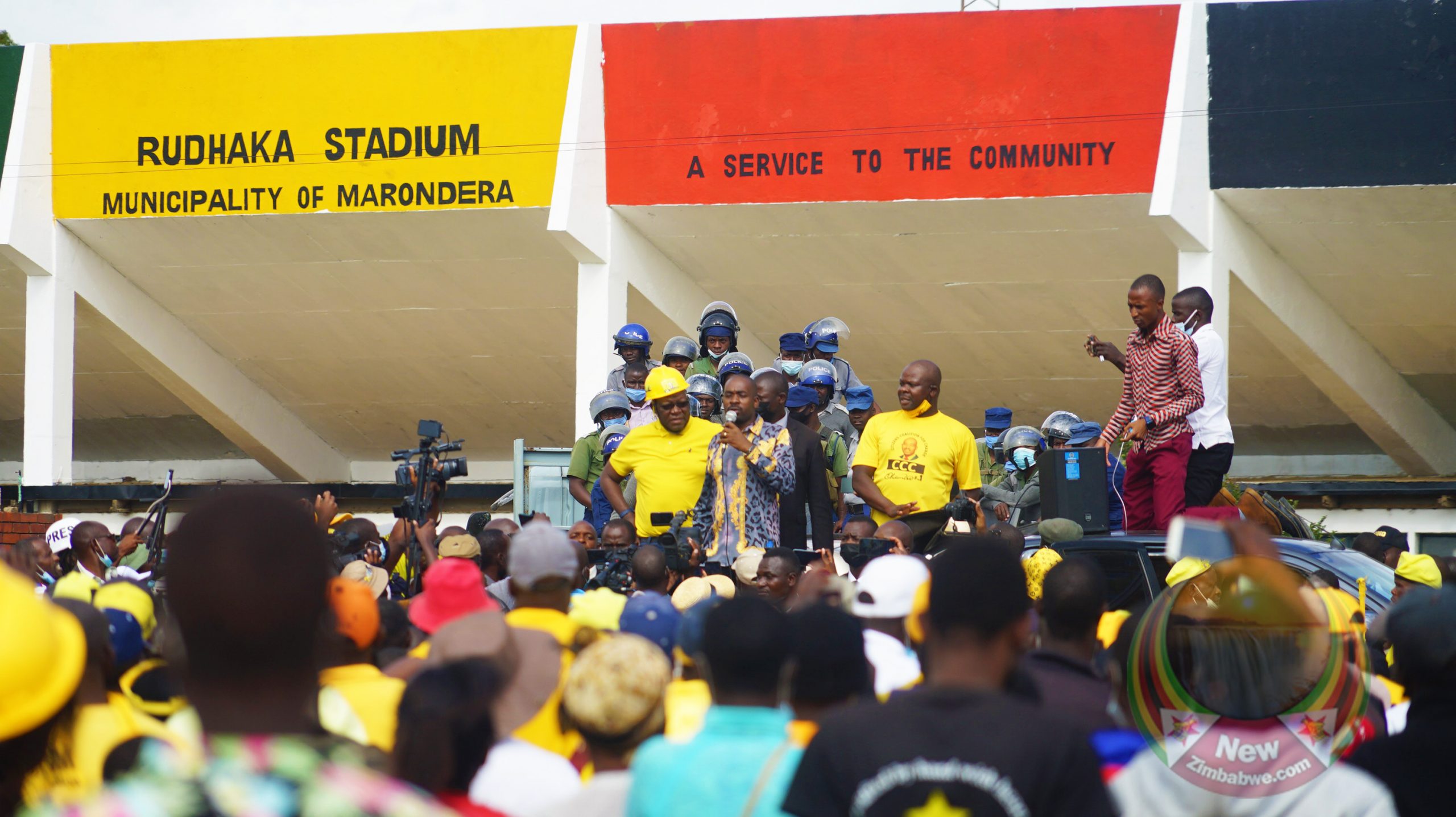 THOUSANDS of Citizens Coalition for Change (CCC) supporters turned Marondera into a sea of yellow in anticipation of a rally that was eventually thwarted by armed anti-riot police officers at Rudhaka stadium Saturday.

A High Court judge who was supposed to preside over the case could not be located for the whole of Friday night and Saturday morning.

Police had to call for reinforcement from Harare after realising the constantly growing number of supporters could not be handled by dozens of police details initially deployed to the venue Saturday morning.

Armed with teargas canisters, rifles, baton sticks and water canons, police sealed off all entrances into Rudhaka stadium forcing supporters to converge in the larger space outside.

Not even an unprecedented move to confront the police commander by CCC president Nelson Chamisa could get them to budge.

They maintained orders had been given from Harare for them to ensure he does not conduct the rally, with a female commander overhead communicating with an unknown caller, she would not allow him to speak.

A High Court urgent application to reverse a Friday ban of the rally was not sat for judgement as the judge “disappeared” according to Chamisa.

All that did not dampen spirits of his supporters however as they spent the whole day singing, marching, eating and drinking as if oblivious to risk of a violent clampdown by police.

Having been denied an opportunity to address his supporters Chamisa left for further consultations before making a dramatic comeback to bid farewell to them while standing at the back of a party vehicle.

“We had come here to have a peaceful rally but the police have stopped us. Do not blame them, they are just doing their job, there is a hand directed them from behind,” said Chamisa.

“Yesterday our lawyers were at the High Court seeking reversal of their ban but the judge was nowhere to be found the whole night.

“Our lawyers basically slept at his doorstep and that is where we are also coming from.”

Fears of Gokwe repeating itself eventually subsided as the supporters made their way back home, singing and seemingly happy they had at least heard Chamisa speak.

Police teargassed CCC supporters in Gokwe, dispersing them from a rally which had been given a greenlight by the High Court in Harare.

“We are working on another plan for Marondera, we will advice you on the way forward,” said Chamisa as he bade his supporters farewell.

He has been to Harare, Gokwe, Kwekwe, Bulawayo and Gweru with his by-election campaigns ahead of the March 26 council and parliamentary plebiscite.

He is set to address party supporters in Beit-Bridge Sunday before heading to Tsholotsho on Monday and Binga on Tuesday.