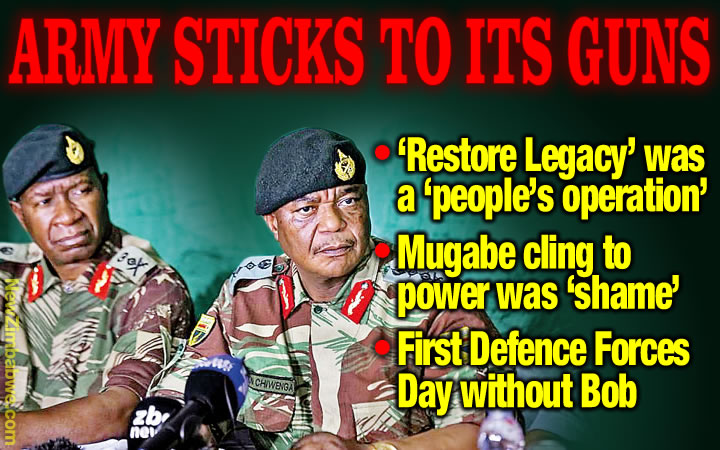 Chimonyo was addressing the media at the Josiah Magama Tongogara barracks on the eve of Tuesday’s Defence Forces Day, the first to be presided over by a different leader.

The army chief said the military intervention, dubbed Operation Restore Legacy, which saw Mugabe placed under house arrest for a week leading to his resignation, was a “people’s operation whose main objective was to arrest potentially volatile, economic and political situation in the country”.

“The operation was launched to rescue the values and those of the liberation struggle that had been threatened by counter revolutionaries of the so-called G40 cabal,” he said, while referring to the infamous Zanu PF faction which was fiercely opposed to then Vice President Emmerson Mnangagwa succeeding Mugabe.

During the time Mugabe was held captive right up to his resignation, hundreds of thousands of locals poured on to the streets countrywide to both celebrate what was his impending fall and also show solidarity with the military action.

Said Chimonyo; “Operation Restore Legacy was an unprecedented miracle that saw millions of Zimbabweans from all walks of life coming out marching against former President Mugabe and his wife Grace, including the G40.

“As you may be aware, Operation Restore Legacy witnessed millions of our people spontaneously taking to the streets regardless of the colour, religion, race, creed and political affiliations.”

The army boss reiterated claims the military intervention was meant to get rid the “G40 cabal” that had allegedly usurped Mugabe’s powers, causing national confusion in the process.

If Mugabe had not resigned, Chimonyo said, this could have caused public disgrace and shame to the 94-year-old former ruler.

“The main target of the operation was those criminals that had surrounded the former president causing anxiety and despondency among the people of Zimbabwe.

“The popular uprising by the people saw the voluntary resignation of the former president.

“If he had not resigned, the motion by parliament, the impeachment process by the legislature that had been set in motion by Parliament could have seen ignominious end to the former president’s political career and legacy,” he added.

However, addressing the media on the eve of the country’s harmonised elections last month, Mugabe described the army claims as nonsensical, insisting he never intended to leave his wife as President.

Mugabe insists the ostensible targeting of so-called criminals around him by the military was in fact an excuse to remove him from power.