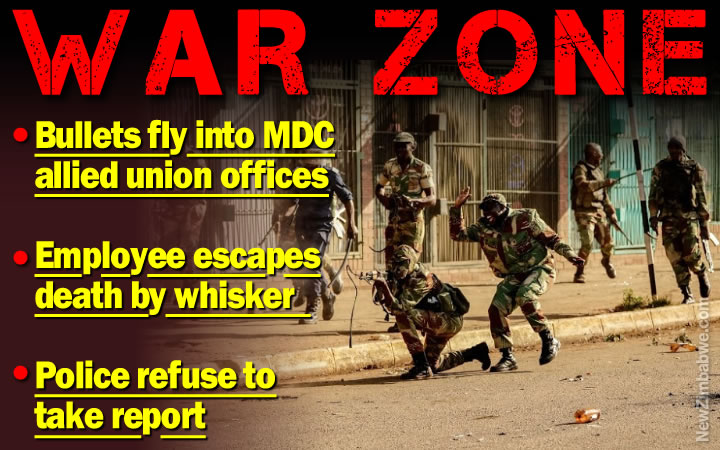 The Harare protests by MDC Alliance supporters in Harare’s CBD invited army deployments which led to the gunning down of six while over a dozen were left nursing injuries.

A ZCTU security officer, Joseph Chuma, received minor injuries on the head after he was cut by broken glass from a window he was sitting close to.

A legal advisor, Zakeo Mtimtema, escaped death by a whisker after a bullet went through his office window, missing him by just inches.

Eyewitnesses who were at the building at the time of the shootings said the assailants were firing from a slow-moving army truck.

ZCTU has since filed a police report with the police against the army at Harare Central Police August 7.

Moyo told NewZimbabwe.com they were not happy police appeared reluctant to hold the army responsible for the incident, insisting on them in fact identifying the individuals who fired the shots.

“We made a report of an incident that happened at our offices on the 1st of August 2018, where soldiers pumped live rounds of ammunition at the second and third floors of our offices,” he said.

“What we found strange was that we were asked whether we knew who exactly fired the bullets and when we said it was the army, the officer who attended to us then said it was improper to just mention an institution but we should have a name of the person responsible, otherwise they treat the perpetrators as ‘unknown’,” he said.

Coincidentally, ZCTU is a strong ally to the MDC Alliance after the opposition party was formed 1999 among labour and civil society activists.

The Emmerson Mnangagwa government and Zimbabwe’s military boss, general Philip Valerio Sibanda have all refused to take responsibility for the shootings.