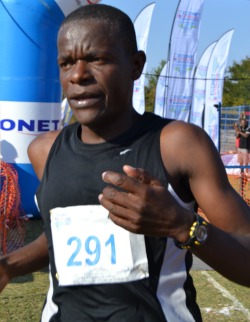 RUNNERS from uniformed forces dominated the 2016 Econet Victoria Falls Marathon on Sunday with those who came in top 10 in the 21km and 42 km male and female categories mostly soldiers, prison guards and police.
Millen Matende, a gunner, stole the title from Nkosiyazi Sibanda from Blanket Mine. Sibanda, who had dominated the event since 2012, went into the event seeking a fifth title.
Matende, running for Black Rhinos, finished 42 km in 2 hours 19 minutes and one second while Sibanda came second in 2 hrs 19 mins and 35 secs. Matende went home $900 richer.
The 21 km race was also won by Black Rhinos’ Wirimayi Juwawo who is now based in South Africa after he finished the race in 1 hr 6 mins and 5 secs to beat Calvin Pangiso of Prisons who finished in 1 hr 6 mins and 16 secs.
On third place was Zambian Costane Chiyaba who was followed by a chain of Zimbabwe National Army and ZRP participants in top 10.
In the female 42km full marathon, veteran, Thabita Tsatsa, defended her title when she romped home in 2 hrs 50 mins to shrug off the close challenge of other veterans Olivia Chitate, Chokore sisters Chiedza and Lizzy and Monica Kativu whose star is fast fading.
In the half marathon, Prisons’ Patience Murowe finished in 1 hr 19 minutes, breaking her 2015 record of 1 hr 23 minutes.
She beat Rudo Mhonderwa (1 hr 21 mins), who is trained by Tsatsa while veteran Samukeliso Moyo finished 9th after 1 hr 31 mins.
Defending champion, ZRP’s Constance Nyasango, only finished in 1 hr 24
minutes in third place.
Matende, 33, said he had been training hard.
“It’s my third time in the race and every year I have been training hard. I managed to let them set the pace and overtook them after 30km,” he said.
Masango said she suffered an injury recently and that cost her.
A few Zambians made it to the top 10 of the half marathon and full marathon.
The Econet sponsored marathon is organised by Wild Frontiers and Adventure Zone and draws participants from across the world.
Advertisement