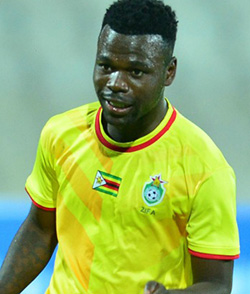 SOUTH Africa: Lamontville Golden Arrows have concluded the purchase of Knox Mutizwa from champions Bidvest Wits and will be able to line up the Zimbabwe international against his old side in Friday’s MTN8 quarter-final‚ which marks the start of the new domestic campaign.

Mutizwa had spent last season on loan at Arrows and scored five goals in 14 league and cup starts but now Arrows have made the move permanent in time for the match at Bidvest Stadium.
Mutizwa was named the best payer at the Cosafa Cup in the North West Province last month where Zimbabwe won a record fifth title.
The 23-year-old is joined at the club by fellow Zimbabwe international Kudakwashe Mahachi‚ who has had his contract extended after last season moving outright from Mamelodi Sundowns.
Arrows have also added Thabiso Mgwaba to the attack.
The 23-year-old was released by Chippa United after failing to make the team‚ having previously been on loan at Cape Town All Stars in the National First Division
Arrows have also signed central defender Mzwandile Buthelezi from Acornbush United‚ who last season came close to upsetting Kaizer Chiefs in the Nedbank Cup.
Left back Zolani Nkombela‚ 23‚ has also been added from Mbombela United‚ officials said.
He made 21 starts in the NFD last season.