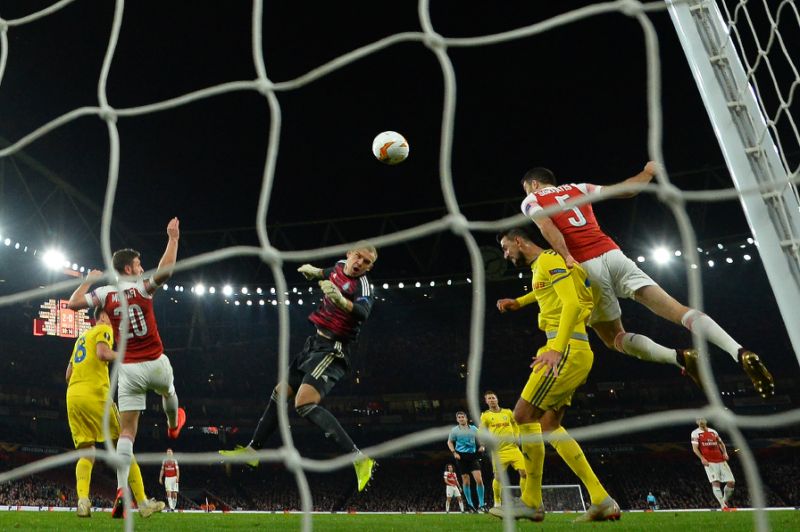 Arsenal and Chelsea reached the last 16 of the Europa League on Thursday after the Gunners comfortably saw off BATE Borisov 3-0 and Maurizio Sarri’s troubled side relieved some of the pressure on him with the same scoreline against mediocre Malmo.

After falling 1-0 in Belarus, Arsenal were level on aggregate after just three minutes when Zakhar Volkov sliced Pierre-Emerick Aubameyang’s low cross past Denis Scherbitski in his own goal.

Unai Emery’s side deservedly went through thanks to two thumping headers from Shkodran Mustafi and Sokratis either side of the break which put them into Friday’s draw.

“We wanted this result but also we wanted to play for our supporters here. We did our best to come back (in the tie) and the team worked very well,” Emery told BT Sport.

Ahead 2-1 from the first leg in Sweden, Chelsea had to wait until 10 minutes after the break for the first sign of excitement, Olivier Giroud tapping in the decisive goal of a humdrum encounter at Stamford Bridge.

Ross Barkley made sure of the win with a super free-kick in the 74th minute, just after Malmo’s Rasmus Bengtsson was sent off for his second bookable offence, before 18-year-old Callum Hudson-Odoi made the most of a rare start by crashing home the third.

“The goal that came at the end was definitely a bonus for the way that we played.”

Carlo Ancelotti’s Napoli breezed to a 2-0 win over FC Zurich that saw them win 5-1 on aggregate, while Inter Milan went through 5-0 after sweeping four goals past Rapid Vienna without reply at the San Siro.

French side Rennes are into the last 16 of a major European tournament for the first time after winning possibly the most entertaining tie of the round 6-4 on aggregate following a barnstorming 3-1 win at Real Betis.

Goals from Ramy Bensebaini and Adrien Hunou fired Rennes into a two-goal lead within the opening half-hour but the tie was put back in the balance when Giovani Lo Celso pulled one back four minutes before half-time.

With Betis pushing to equalise and go through on away goals, M’Baye Niang finished off an injury time break to see the mid-table Ligue 1 side through.

Zenit overcame Fenerbahce 3-1 in Russia, Magomed Ozdoev and Sardar Azmoun giving the hosts an aggregate lead before Mehmet Topal put the Turks ahead on away goals just before the break.

However, on his home debut for Zenit, Iranian international Azmoun struck again 14 minutes from the end to see Sergei Semak’s side through.

Pablo Fornals snuck Villarreal past Sporting Lisbon with a fine curling strike that gave the La Liga side a 1-1 draw on the night and a 2-1 win overall, while Benfica eased past Galatasaray 2-1 after a goalless draw in Portugal.

Krasnodar shocked Bundesliga outfit Bayer Leverkusen with a 1-1 draw that saw them through on away goals.

Eintracht Frankfurt saved Germany’s blushes by sweeping past Shakhtar Donetsk with a pulsating 4-1 win that gave them side a 6-3 aggregate victory.

Scotland’s participation in Europe ended after 10-man Celtic fell 1-0 at Valencia, already 2-0 up from the first leg in Glasgow and winners in Spain thanks to Kevin Gameiro’s 70th-minute strike.