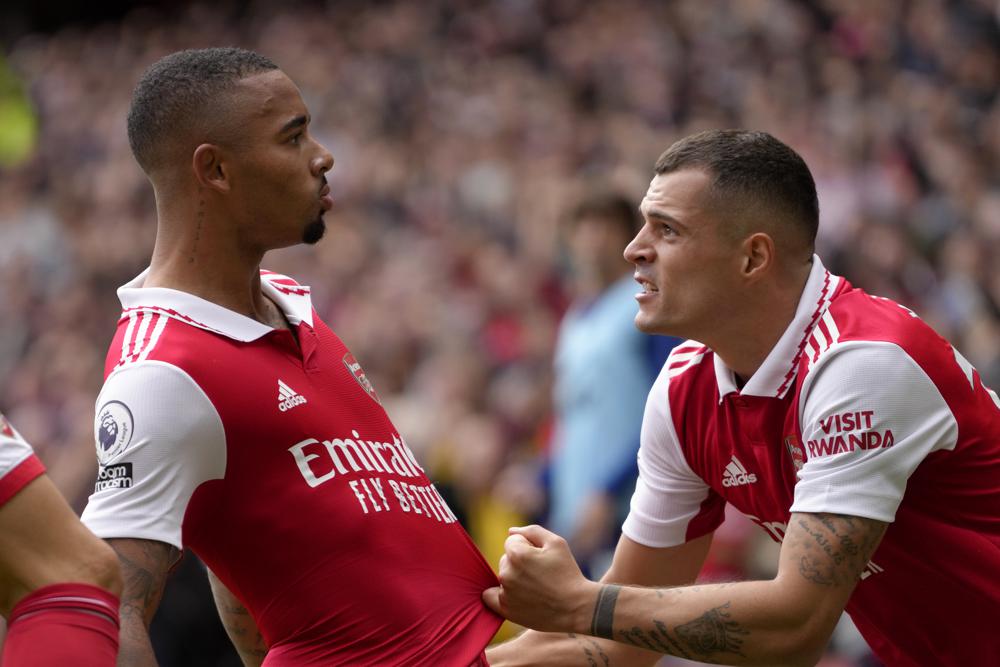 LONDON: It’s looking increasingly like Arsenal is the real deal in the English Premier League.

It’s also looking like Liverpool hasn’t got what it takes to mount another title challenge.

Arsenal made it seven wins from eight games to open the season by beating Tottenham 3-1 in the north London derby on Saturday, ensuring Mikel Arteta’s team will stay top for at least another week.

The only defeat for Arsenal came at Manchester United, but that was only after an encouraging and dominant performance for large spells at Old Trafford.

On current form, it looks well within Arsenal’s grasp to finish in the top four and qualify for the Champions League for the first time since 2017.

Getting in the top four might be the extent of Liverpool’s ambitions after a 3-3 home draw against an entertaining Brighton team already molded in the bold style of its new Italian coach, Roberto De Zerbi.

Leandro Trossard scored twice in the opening 17 minutes and completed his hat trick in the 83rd at Anfield after Roberto Firmino’s double sparked Liverpool’s fightback.

Liverpool, the 2020 champion and the biggest league rival of dominant Manchester City in recent years, is already 11 points behind Arsenal and has won only two of its first seven games.

Conor Gallagher scored a 90th-minute winner for Chelsea in its 2-1 victory at Crystal Palace, the team where the midfielder spent last season on loan.

Thomas Partey, Gabriel Jesus and Granit Xhaka were the scorers for Arsenal, which cruised to the win at Emirates Stadium as Tottenham played with 10 men from the 62nd minute. Emerson Royal’s red card was for a needless studs-up challenge on Gabriel Martinelli when the score was 2-1.

Harry Kane equalized via a penalty for Tottenham, which would have climbed above Arsenal into first with a win but instead saw its 13-game unbeaten run in the league — stretching back to last season — come to an end.

City can climb back to a point behind Arsenal with a win over crosstown rival Manchester United on Sunday.

“It’s a really hungry and humble team, believe me,” Arteta said. “It’s nothing that we have done yet and there’s still a lot of things to improve. That’s the direction we’re taking.”

De Zerbi immediately put his stamp on Brighton after his arrival as Graham Potter’s replacement, setting the team up in a 3-2-4-1 formation at times at Anfield and taking risks in possession against one of the world’s best pressing sides.

It was a bold ploy and it took Liverpool by surprise, getting instant results through goals in the fourth and 17th minutes by Trossard.

Liverpool got to grips with Brighton’s playing style and mounted a fightback. Firmino scored either side of halftime before goalkeeper Robert Sanchez miscued his punch from a corner which hit his own defender, Adam Webster. The ball dribbled into the net in the 63rd.

Brighton claimed a point — one even Liverpool manager Jurgen Klopp said was deserved because of the visitors’ adventurous play — when Virgil van Dijk missed a clearance off substitute Kaoru Mitoma’s cross and Trossard steered home a finish at the back post.

“We have to learn how to improve with the ball possession and to increase our ball speed and it is up to us to decide it,” De Zerbi said. “It’s really hard to control the game in the Premier League — only Manchester City is doing that.”

“And when someone stamps on it, it is really difficult,” he said.