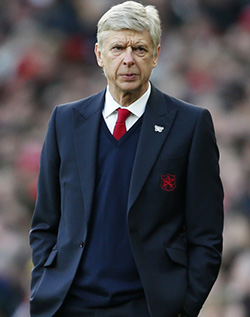 LONDON: Arsenal hope Arsene Wenger remains their manager beyond the end of the season, but the London club said Monday there was no rush to hold fresh contract talks.
The 67-year-old recently celebrated his 20th anniversary as manager of Arsenal but the Frenchman’s contract is due to expire at the end of this campaign.
Arsenal chairman Chips Keswick, questioned about Wenger’s contractual arrangements during Arsenal’s Annual General Meeting on Monday, said: “We all recognise the fantastic contribution Arsene has made to the club in the last 20 years.
“We are confident about his ability to take us forward. We will sit down and discuss the future at the appropriate time but our focus is on maintaining the current run and competing for trophies.”
Wenger – linked to the England coaching job – had little to say on his position, other than to assure Arsenal fans he would not still be in charge in another 20 years’ time.
The Gunners boss has been on the receiving end of criticism at previous AGMs, with fans frustrated by Arsenal’s failure to win the Premier League since 2004.
But with Arsenal now level on points with Premier League leaders Manchester City, Wenger received a warm reception from shareholders on Monday.
“Yes, it’s 20 years. I’m sorry!” joked Wenger as he began his remarks to the AGM. “I would like to apologise for every minute I made you suffer in these 20 years – but you don’t look too bad for people who have suffered for 20 years.
“I am sorry for the boy who was born 20 years ago and has only known one manager. I would like to reassure him that when he is 40 he will know a few more.”
On a more serious note, Wenger said Arsenal were now well-placed to challenge for the title.
“Today we are in a much more competitive position to fight for the championship than five or six years ago,” he said. “I believe we have a competitive team in a very competitive league.
“I believe the team has the commitment, togetherness, hunger, desire and unity and we have a good chance to compete for the Premier League.”
Arsenal are at home to second-tier Reading in the fourth round of the EFL Cup on Tuesday.Advertisement